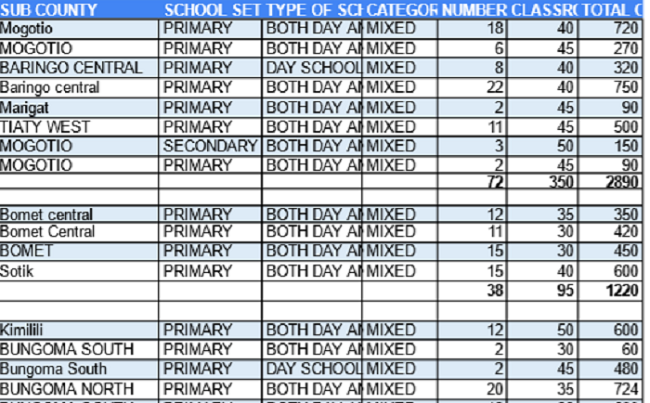 What has worsened the situation further is the failure to complete new classrooms yet there is only one term to go.

Yesterday, Education PS Jwan Julius confirmed that the schools will only be updated in the application portal within the next 10 days if they meet the required standards.

“In the long run, we shall have captured all of them and therefore there shall be no cause for alarm,” he said.

What that implies is that the affected schools will not get grade seven learners in 2023, despite Education Cabinet Secretary George Magoha’s deadline extention to September 10 from the initial deadline of August 30.

Latest List of All Junior Secondary Schools-Do Your Revision Here

A majority of schools have expressed lack of readiness for Junior Secondary, maintaining that they are yet to prepare enough space for the transitioning learners.

Additionally, Other schools have raised claim that the classrooms set aside would not be adequate since a huge number of students are expected to join the junior secondary schools from Grade Six.

The new secretary-general of the National Parents Association, Eskimos Kobia, also admitted that all was not well.

He gave an example of Naivasha, where each school was benefiting from one new classroom in the first phase yet there are over 400 students in Grade Six in most public schools.

“We shall in the coming days engage the ministry on listing all junior secondary schools, school fees and the completion of the classrooms on time,” he said.

Nakuru Director of Education Fredrick Osewe noted that all public schools in the county were in the portal.

He said private schools not listed had not met the standards.

“We have over 180 public schools from the county in the portal and we are in the second phase of construction CBC classes,” he said.

But according to one head teacher in Naivasha, some schools were missing from the list, leaving parents and students in confusion. “We are glad that the government has reviewed the deadline as tens of schools are missing from the selection portal,” said the teacher.

Another teacher from Kinangop in Nyandarua County noted that stand-alone primary schools were the most affected. “We have primary schools that don’t neighbour a secondary school, meaning that they will have to use the few classrooms to host the coming number of students,” said the teacher.

In Uasin Gishu, the principal of Little Lambs Schools Benjamin Wemali said they had completed 16 classrooms for junior secondary, and the construction of a laboratory was underway yet the school had not been placed in the portal yet.

“We have the codes which show that we are approved to host junior secondary. Whether our school name appears in the portal or not, it does not mean that we cannot host a junior secondary school,” he said.

A principal in a public school in Kisumu also claimed that the name of their school is missing from the selection list.

“We are in the process of preparing the infrastructure for learners who will join the junior secondary school but the name of our school is not among them,” said the head teacher.