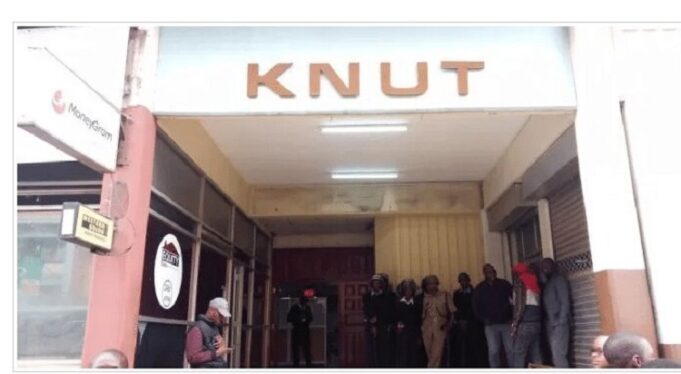 The exit of Wilson Sossion has not ended the woes of the Kenya National Union of Teachers (KNUT). On Thursday, a team of auctioneers raided the premises of the once mighty union, over a debt amounting to Ksh1.4 million.

The auctioneers descended on the cash-strapped union’s offices located along Mfangano Street and attached property as the newly installed leadership watched helplessly.

Addressing the media shortly after the event, KNUT Deputy Secretary-General Hesbon Otieno distanced himself from knowledge of the debt, arguing that the new team is not aware of the debt.

“I arrived and found them taking office furniture and a lot of other equipment. I pleaded with them so that we talk but they declined,” said Otieno.

He added, “None of us was aware of these debts. You can clearly see that some leaders were engaged in some underhand dealings and with time we shall get to know what else is wrong so we fix it.”

The raid brings to the fore the troubles the once stable teachers’ union that boasted of more than 180,000 members is currently facing.

Today, with only below 15,000 members, reports indicate, KNUT’s monthly dues have shrunk to Ksh12 million from the over Ksh144 million it used to receive at the height of its optimum operations about three years ago.

The union is unable to pay its employees even as staff medical cover remains suspended.

In November last year, the union said it had been forced to shut down 110 offices due to a cash crisis.

Then KNUT Secretary General Wilson Sossion blamed the government for the union’s troubles.

Sossion blamed the Teachers Service Commission (TSC) for the woes haunting the union, claiming that the government was determined to permanently cripple KNUT.

The nominated Member of Parliament, who has been at the helm of KNUT since 2013, said he will now shift his full attention to national politics.

His resignation came just a day before the union’s national elections.