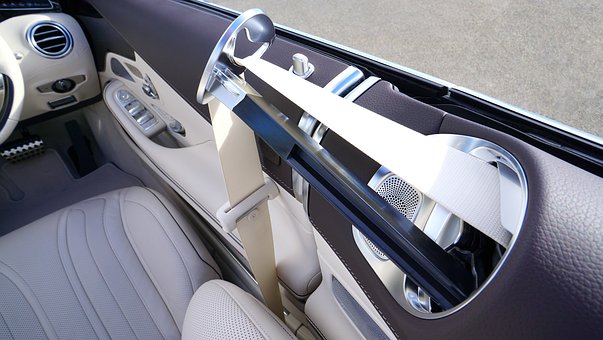 The government has put in place measures to reduce road accidents. One of these measures is use of seat-belts. Car owners have been forced to install seat-belts in their cars. Many passengers do not wear seat-belts unless reminded or when they see the police. This leads to many deaths during accidents.

General motors introduced an automatic belt system in 1980 (Kratzke 1995]. When the door open, the shoulder and the lap belt which are attached to the rear edge of the door swing with the door. When the door close, the belt fastens on the occupant. But the system was cumbersome, fraught with reliability issues and has easy disconnect feature .Kim et al,1995]proposed that drivers behavior and non-use of seat belts account for the highest number of road causalities among passengers .Failure to use a seat belt is a major risk factor for road traffic deaths and injuries among vehicle occupants .Passengers who are wearing their seat-belts at the time of collision account for the majority of occupant road traffic fatalities [Masaharu,1990].In addition , the passengers who do not wear seat belts and have a frontal crash are most likely to suffer a head injury . An automatic seat belt where lap seat-belt and a shoulder seat-belt are automatically set to restrain a seated person [Masaharu 1990] has been in use in the united states .Both ends are attached on the inner surface of the door .The disadvantage of this possibility of the passenger being vulnerable that involve the door opening .When a crash occurs an occupant with a seat belt will continue to move at the same speed at the vehicle was traveling before the collision and will be catapulted into the structure of the vehicle -most likely into the steering wheel if they are driving ,or into the back of the front seats  if they are rear seat passengers .Alternatively ,they can be ejected from the vehicle completely .Being ejected from a vehicle drastically increases the probability of sustaining severe personal injury or death .The use seat-belt and child restraints is one of the most important actions that can be taken to prevent injury in a motor vehicle crash [Masaharu 1990]. While seat-belts and child restraints do not prevent crashes from ,they taking place they play a major role survival increases dramatically when appropriately restrained .[kratzke 1995] proposed a seat-belt in which ignition system of the car is fitted with an ignition interlock that prevents the engine hence the vehicle from starting if any of the passengers has not fastened the seat belt.

What is the minimum force exerted on seat that enables the arms to fasten and how many bands requires the least force to fasten the arms?

Can an electric circuit be used to automatically tie or untie seat-belts?

Statement of the problem

The government has enforced use of seat belts. However, many passengers do not use them unless reminded or when they see police officers. The measures taken by government have not reduced deaths. The use of automatic seat-belts will be a great leap in increasing use of seat-belts hence deaths during road accidents.

Use of seat-belts reduces loss of lives during accidents. however, many passengers do not fasten seat-belts unless reminded or near police check points.

The minimum force required to fasten the arms is 100N

To determine the minimum force exerted on chair that enables the arms to fasten.

Increasing force exerted on the seat reduces the distance between the arms.

Increasing the number of belts increases the force needed to fasten the arms.