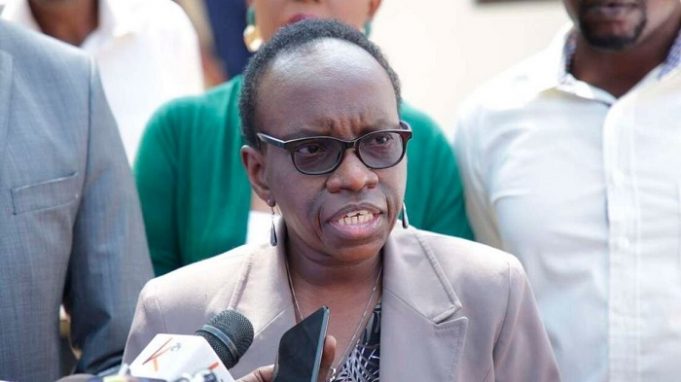 The Education Ministry, led by Cabinet secretary professor George Magoha is on the spot for denying the Auditor-General access to a student’s database, in a bid to facilitate scrutiny of Sh60 billion expenditure. This move has raised untold fears concerning the transparency in the use of free education funds.

The State auditor general confirmed impossibility to verify the expenditure of Sh59,541,584,343 since she was unable to access the student enrolment data in the National Education Management Information System (Nemis), caused by restrictions by the State Department of Early Learning and Basic Education.

According to the Auditor-General Nancy Gathungu, several anomalies were noted in the transfer of education subsidies to schools.

New T-Pay Terms and Conditions For Teachers and Third Parties

She maintained that the ministry transferred free education subsidies to 9,024 secondary schools amounting to Sh36,739,481,231 yet the data on the number of students per school and county at any time of disbursement could not be verified.

“The reason for non-verification was due to inability to access the student enrollment data in the National Education Management Information System (Nemis) as a result of restrictions by the Management,” Gathungu told Parliament in a report.

The ministry declined to avail the data despite Gathungu’s  warning that failure to grant access to the Nemis system contravenes Section 9(e) (i) of the Public Audit Act, 2015.

According to the Act, the Auditor-General or an authorised officer shall have powers of unrestricted access to all books, records, returns, reports, electronic or otherwise and other documents of entities listed under Article 229(4) of the Constitution.

This implies that the Auditor-General, or an officer authorised should enjoy unrestricted access to any property or premises used or held by State organs or public entities covered by Article 229(4) of the Constitution and subject to audit under the Act.

“It was therefore not possible to validate the data used for disbursement of subsidies to schools,” she confirmed.

“In the circumstances, the accuracy and validity of subsidies to Public Corporations of Sh59,541,584,343 could not be confirmed.”

Ms Gathungu said the ministry disbursed a total of Sh57.01 billion as a subsidy for free day secondary school.

“Further, the disbursement schedule included payments amounting to Sh137,084,111 made to 225 secondary schools whose bank account numbers format differed significantly from the format of bank accounts for banks supported by the national banking system,” she said.

The auditor said there were no confirmation receipts from the benefiting schools. “It was therefore not possible to confirm whether the schools’ bank account numbers were correctly captured and the concerned schools received the funds,” she said.

On the capitation, Ms Gathungu said the disbursement report provided for audit verification including Sh8.3 million that was disbursed to schools that had the same bank account numbers even though the names and sub-county of the schools were different indicating an error in the funds’ transmission.

The anomaly was not explained and there was no evidence of refunds provided to indicate the correction of the error, Ms Gathungu said.

“Although the management (ministry) explained the amounts were as a result of some schools that had not received their earlier capitation monies for reasons that they had not updated form one admissions data in the NEMIS system together with unexplained loss of data in the system, the basis of identification of the beneficiary schools was not supported by any documentation in form of claims from the benefiting schools or evidenced by any duly approved management report or exception report from the system to indicate that the benefiting schools had not received the earlier disbursement,” she said.

The auditor said a sample of the school included on the list receiving the disbursement had been included in the schools that had received their regular disbursement on time and therefore the payment was a duplication. Ms Gathungu said the ministry did not explain the anomaly.

In addition, Ms Gathungu said payments made to 31 schools were made to the bank account whose format did not conform to the national banking system of coding.

She also raised the red flag on an amount of Sh22,140,000 paid to 82 secondary schools in the Arid and Semi-Arid Land (ASAL) areas to support the needy students in the ASALs.

Ms Gathungu said no documentation was provided to support the basis of identification of the needy schools.

Relief For Unemployed P1 Teachers as TSC Plans to Recruit 30,000...