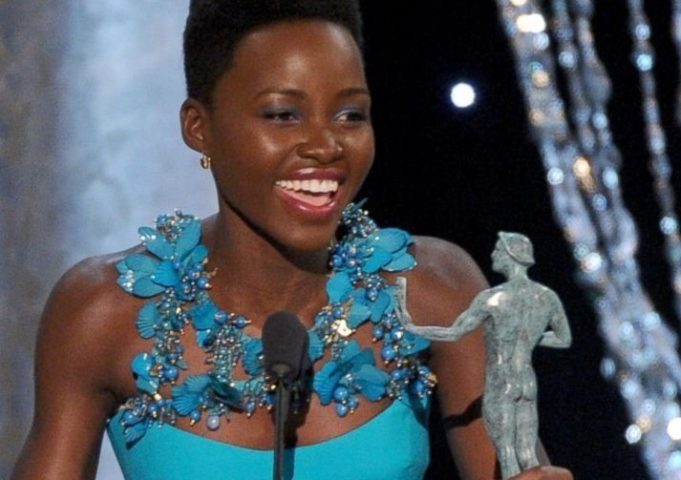 Lupita Amondi Nyong’o was born on 1st of March 1983.She is 37 years old as at march 2020.She was born abroad, in Mexico, where her parents had fled to after a political intolerance in Kenya in 1980 during the dictatorial Moi regime that saw his opposers tortured at the famous Nyayo chambers. Her parents, professor Anyang’ Nyong’o-a successful Kenyan politician, and Dorothy Nyong’o-the managing director of cancer foundation, are both Kenyans of Luo origin.

In 1984 when Lupita attained the age of 1, her family came back to Kenya.

Lupita spent her early years schooling at an international school in Rusinga island, in Homabay county in Kenya. At age 16 she went back to Mexico for Spanish lessons at the national university of Mexico, which took seven months, after which she came back to her home country.

She then proceeded to the united states of America’s Hampshire College to pursue a bachelor’s degree in filmography and theatrics.

She later proceeded to the Yale Drama School for a degree in acting at master’s level.

Lupita started her career in 2005 as one of the crews in various movies. She has acted over 100 movies including: Name sake, constant gardener, where God left his shoes, my genes, east river, Shuga (a Kenyan drama series), 12 years a slave, black panther, among others. She has even acted plays written by the famous writer, William shakespear. In most of her movies, she poses as a poor African girl, being mistreated but later conquers.

She is not only an actor but also a director, producer, a poet a singer and a model.

Lupita has won several awards including Herschel Williams Prize, Golden Globe Award, BAFTA Award, Guild Awards, Academy Award, Oscar awards and many more. Most of the awards recognize her as the best supporting actress of the films she has acted.

Her charities include: GLAAD, MPTFF, Save the Elephants and Wild Aid.

Lupita is currently a spinster. However, she has confided that her BFF is an actor in south Africa called Trevor Noah. Rumors also have it that there is some strong bond between her and Michael Jordan, her co-actor in the movie black panther. Whoever will win the trophy between Trevor and Michael will tie the knot with Lupita Nyong’o.