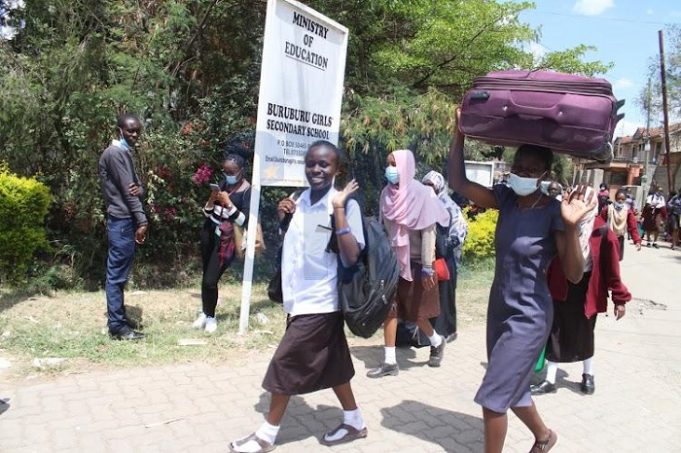 Buruburu Girls To pay Ksh1,500 Each for damages caused by fire

Buruburu Girls High School parents will have to raise ksh 2.2 million to cater for damages incurred from last week’s fire incidence. This implies that Each parent of the 1,466 students will have to pay Sh1,500.

The school administration has recalled the students back to school and are expected to report from tomorrow.

Last Sunday, more than 60 students were rushed to the hospital following a fire incident that burnt down one cube out of the 45 cubes in the Kingdom Dormitory.

The students had minimal injuries and were rushed to the nearby Metropolitan and Jamaa hospitals in Buruburu after the inferno.They were later discharged though  one of the girls was left with a fractured leg.

The students had been allowed to go home for a few days as investigations commenced to know the cause of Sunday’s fire which is still unknown.

According to the reporting schedule, all Form Three and Four students will report on Monday, November 8, 2021 while Form One and Two counterparts will report Tuesday day at 9am

“This is to inform you that all students must report back to school accompanied by parents,” reads the letter sent to parents by the school.

In addition to that, all parents are expected to bring full school fees and Sh1,500 for damages incurred from the fire.

Going further, the school has also prohibited the students from carrying body sprays, sanitisers, spirits, jewelry, and any form of beadwork

“Cars will not be allowed in the school compound,” reads the letter.

Education CS George Magoha and the entire leadership of the school heads association are set to appear before Parliament to discuss the wave of fires in schools.

Senators have summoned them to discuss the possible causes and future remedies to contain the infernos that have been witnessed in at least five schools across the country in the past week.