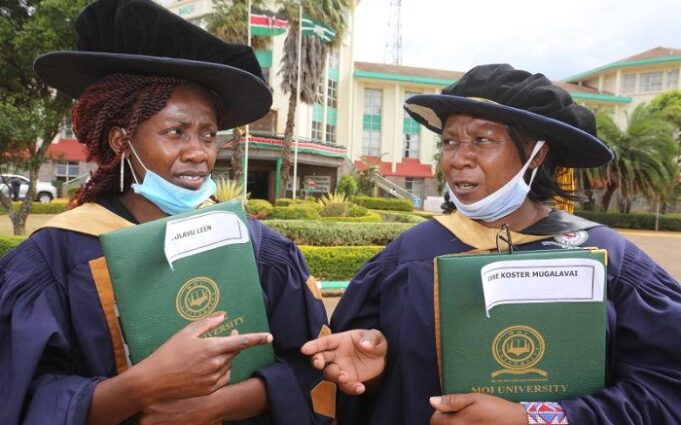 On 10th December 2020, more than 5,000 students graduated at Moi university, during a virtual ceremony.  Anne Mugalavai and Leen Kavulavu were among less than 200 lucky students who were invited to represent other graduates at the graduation square.

The two women, Anne,58, and Leen, 33, are mother and daughter. Mugalavai was awarded a PhD in Information Science while her daughter Kavulavu graduated with a PhD in History.

They hail From Kegondi Village in Sabatia Constituency, Vihiga County. The mother and daughter have long outstanding journeys to the epitome of academic excellence.

After her diploma, she got a job at Egerton University where she worked as a university assistant librarian.

In 2004, then aged 42, she enrolled for a degree in Information Science at the same university (Egerton) where she graduated with a first-class. “I was the oldest undergraduate student. I decided to join students at the age of my children while balancing between my job as a librarian and studying. But it was my dream to pursue a degree,” Dr Mugalavai says.

She says attaining a first-class motivated her to further her studies, and she enrolled for a master’s degree at Moi University a year later in 2008.

“I graduated with a master’s degree in 2012 but I didn’t take a rest. The following year, I enrolled for my PhD. I am glad that I have now completed, but most importantly, I am exhilarated for completing the journey with my firstborn daughter,” the proud mother of three daughters told Standard Digital.

After completing her master’s degree, Mugalavai says she changed from a library officer at Egerton to a lecturer of information at Rongo University.

She says her second born daughter Fiona Muleke is pursuing a PhD in Human Resource Management at Moi University. Muleke was to graduate this year but could not because of a technical hitch. The last born, Cynthia Chamwada, is pursuing her master’s degree.

Coincidentally, Dr Mugalavai was taught and mentored by her high school teacher Prof Cephas Odini, who also moved to Kenya Polytechnic and later Moi University – becoming her teacher at the three different institutions of learning.

Dr Kavulavu, just like her mother started with a diploma, graduating in 2008 from the Kenya Methodist University in Meru.

At 33, Leen stunned her parents by pursuing higher education and becoming a lecturer at Karatina University when she was 28 years old in 2015.

“Upon completing my masters, I got a job as a lecturer at Karatina University. I also enrolled for my PhD at Moi University. I am happy that I am celebrating this achievement with my mother. She is the one who encouraged and motivated me to enrol,” she says.

She also praises her father, saying he has been pushing them to reach the highest level of education.

Leen’s father, professor  Musalia, says his daughters listened to him when he persuaded them to further their studies despite not qualifying directly to join universities.

“I wanted everyone in my family to attain the highest level of education. I didn’t want to be the only member of the family with a PhD. I gave my wife the time to pursue her studies while I encouraged my daughters to do better,” he explains.

He continues: “We are now a family of academicians – three lecturers and the rest are joining the club. My second born is the brightest but also the most difficult to handle.” NEXT