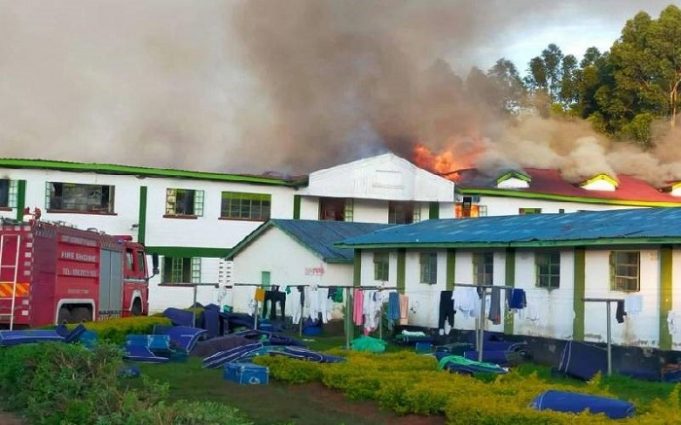 Kakamega High School students will have to pay a total of Sh.21.6 million to repair the damages of razing a dormitory.

A November 11th letter addressed to all parents states that the Sh21, 611,350 was reached after a board meeting held earlier.

According to the school’s management, the actual damage as per the assessment by the Ministry of Transport, Infrastructure and Housing stands at Sh12.1 million.

Also factored in by the management was ksh. 695,420 for the cost of CCTV installation in the incomplete dormitory, with the 280 double-decker beds cost put at Sh4.1 million taking the figure to Sh21.6 million.

Government Sets Strict Guidelines For Admission In Form 2, 3 And 4

Buruburu Girls To pay Ksh1,500 Each for damages caused by fire

Each of the 2,200 students will pay ShSh9,823 on the reporting day to repair the dormitory.

“The grand total of the damage is Sh21.6 million, divided by 2,200 students, will see each student pay Sh9,832,” the letter said. Parents will also have to clear all outstanding Term Two fees.

School Principal Gerald Orina confirmed the statement was issued after the board meeting, and that the figures in the letter were correct.

“These figures came after our professional assessment of the burnt dormitory,” he said.

The students will start reporting on November 15th , with the last batch being expected on November 25.

The school will donate a mattress, two blankets and two bedsheets to the students, whose items were damaged by the fire.