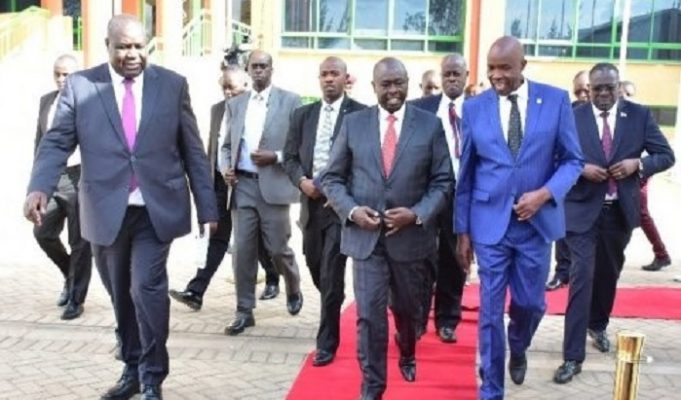 Speaking at the New Mitihani House in South C, Nairobi, while presiding over the launch of the exam season, Gachagua said stern action will be taken against anyone found culpable of leakages.

Gachagua put on notice unscrupulous officers in the education sector believed to aid examination cheating, saying they won’t be spared either.

“While we are banking on quality education to transform our country, some criminal elements have in the past infiltrated systems with the aim of leaking examinations,” Gachagua stated.

He said the government is committed to giving learners an equal playground as they strive to advance their education and secure a better future.

“We want an equal playground for every child to score what they deserve and join their preferred secondary schools and tertiary institutions competitively,” he added.

“We urge vigilance and responsibility. Culprits will be dealt with decisively.”

At the same time, the country’s second in command urged parents and members of the public at large to support the Kenya Kwanza administration’s efforts to ensure learners undertake their examinations in a peaceful environment.

“I call upon parents and all Kenyans of goodwill to assist us in making this examination season peaceful for the candidates,” he added.

“On behalf of H.E. President William Ruto and on my own behalf, I wish all candidates a fruitful examinations season and we look forward to celebrating you once the results are declared.”

“We are also seized of the fact that learning activities were interrupted by several insecurity challenges, especially in the North Rift and other areas prone to cattle rustling. President William Ruto has firmly committed to take every measure to end the criminality,” Machhogu said.

“We have mooted a multi-agency short-term plan of ensuring that schools in the hotspots are not interrupted. We will go an extra mile for every child in those areas to sit their exams as planned,” he added.

He reiterated that the government is committed to dismantling examination cartels, revealing that some members of the group have been identified.

“Some members of examination cheating cartels have been identified so far and we are thankful to the security agencies for the swift action that they have taken,” he said.

While warning candidates against cheating in the exams, CS Machogu said no results will be released to anyone linked to examination malpractice.

He further invited parents and guardians to help the government curb the vice.

“Parents, guardians and communities, in general, must desist from unhealthy cultures such as contributing money to aid candidates to cheat in examinations or charging unofficial levies and other unethical practices,” he said.

Kelvin Anunda Mogaka, Francis Manyara Ogata and Brevin Osano Ombongi, were late October charged before a Nairobi court with defrauding members of the public of millions of shillings through social media in the pretence they were offering Kenya National Examinations papers leakages.

The government is set to administer three national examinations at ago to 3,416,048 candidates later this month.