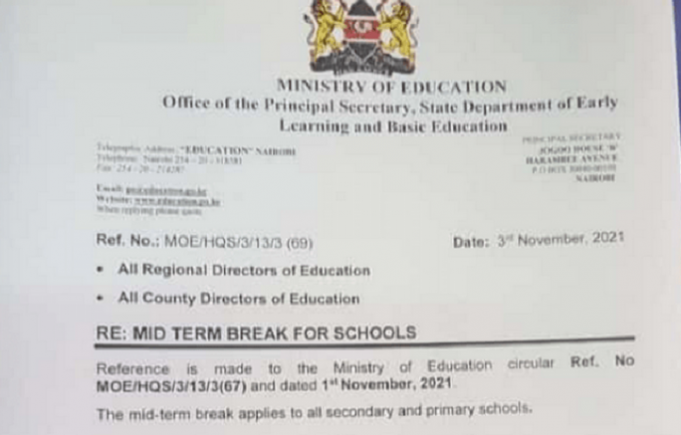 The Ministry of education has extended the mid-term break announced to cover primary schools too, contrary to yesterday’s circular which only targeted secondary schools. This is after the teachers in primary schools, lead by the Kenya national union of teachers, felt sidelined.

In a circular dated 1st November 2021, which was released yesterday, basic education permanent secretary stated that only students in secondary schools would proceed for half term break.

“It has been decided that the half term break will commence on Friday, 19th November, 2021. The students will report back on Tuesday 23rd November, 2021″, Reads part of a circular signed by Julius O. Jwan, the basic education permanent secretary.

According to a fresh circular released this morning,  the ministry of education has now included primary schools in the half-term break. While clarifying the circular that was released on 1st November under the subject ‘midterm break for secondary schools’, basic education permanent Secretary, Julis Jwan, said that primary schools will also break for half term.

He said: “The midterm break applies to all secondary and primary schools”.

“Whereas we appreciate that allowing learners to have a break so as to ease the tension ensuing out the congested term dates as a mitigative measure, we felt that leaving out primary school teachers was segregative and in bad taste. We therefore wanted all schools both primary and secondary to proceed for half term at the same time,” said KNUT secretary general colins Oyuu.

“We therefore wish to inform you that all our teachers will be proceeding for HALF TERM at the same time with our learners from Friday 19th to Tuesday 23rd November 2021. We therefore want to appreciate the ministry of education and all the other stakeholders in the sector for the calm they exhibited while we were addressing this matter. As KNUT, we are committed to a consultative and dialogue based approach to solving teachers’ challenges in the education sector moving forward.”