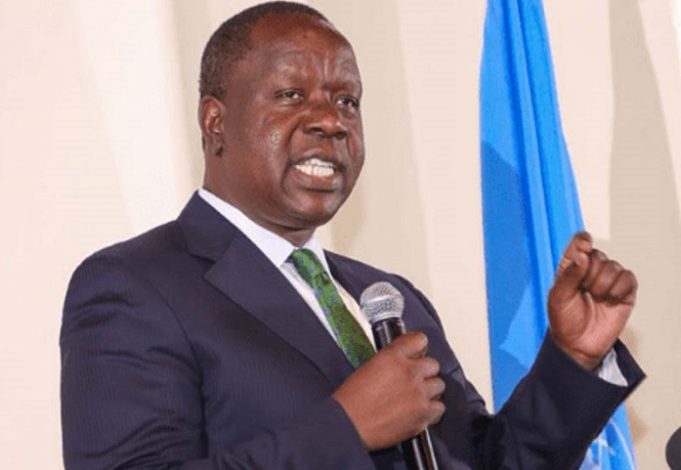 The Government has shifted blames on the human rights activists for the unruly behaviour currently witnessed among students in various schools.

According to the Interior Cabinet Secretary Fred Matiang’i, human rights activists have made it difficult for the Government to have sanity in the education sector.

However, he added that the Government is keen on ensuring there was law and order in the management of the education sector in the country.

“The Government is concerned about the frequent cases of unrest in schools and we are going to put measures in place to ensure we have law and order in place,” said Matiang’i.

Education Cabinet Secretary George Magoha who was in the company of Matiang’i at Egentonto Primary School in South Mugirango Constituency in Kisii County, advocated for the reintroduction of corporal punishment in schools to bring back sanity.

Magoha said that during his time in school, they were caned thoroughly which made him what he is today and that nobody died from the strokes of canes they got from teachers in a bid to instil discipline in the students.

“I am adamant that caning should be reintroduced back in schools immediately because we cannot afford to have rogue students running amok in schools unchecked,” said Magoha.

He said that the 2021 national examinations to be conducted in March next year were ready and that the government will ensure that the exercise was carried out without any anomalies.

“The Government is aware that students have faced a lot of challenges for the last one year since due to Covid-19 and we are going to ensure that all the challenges the students faced during that difficult time are considered,” said Magoha.