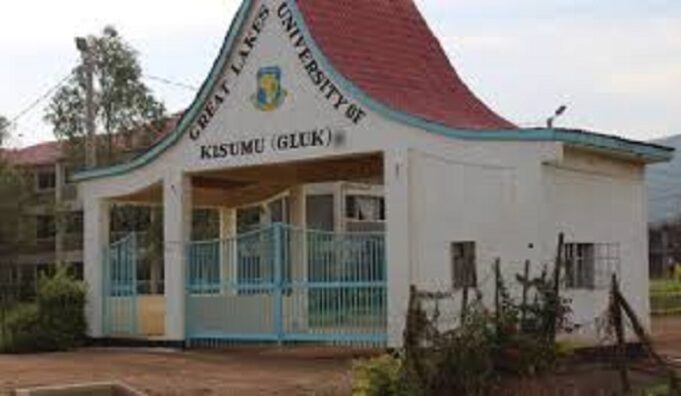 Sources say that the relationship between the university VC, Prof Atieno Ndede Amadi and the university sponsors, Tropical Institute of Community Health (TICH) Trust is not positive. TICH has therefore pulled out since all it wants is new leadership. This has left GLUK with over ksh. 300M in debts.

Transfer to a constituent college

The institution has so far opted to switch to its constituent college, Kisumu Community College of Science and Technology (KCCST), as the row intensifies. Through a letter, Atieno ordered all the staff to move to KCCST by 5th November 2020. Constructions of temporary structures for the main campus are ongoing. All the freshers have also been directed not to report at the GLUK’S Milimani campus but rather to report at KCCST in Kisumu CBD.

“With the auction only three days away, all Kisumu Kibos-based staff, both academic and non-academic, to relocate to the fifth and sixth floors of Mega Plaza, Kisumu CBD CORC (Community Outreach and Resource Centre),” Read the letter in part.

“Please take note that all activities related to relocation of staff and moving of assets will need to be completed by end of day on Thursday November 5, 2020”.

Plans are underway to pull down all temporary buildings in all GLUK campuses such as cafeterias at Kibos and Milimani campuses. The remnants of the structures should then be taken to Kibos Farm “A” centre for storage. Other assets like personal computers, library bookshelves and books, among others, will be to CORC at Centro House in Westlands, Nairobi for storage.

Earlier this month, there was a failed attempt by the Tropical Institute of Community Health (TICH) Trust to evict the VC and introduce a new one.

The trustees moved to court Last month to reverse a decision which had allowed a bank to auction GLUK’S parcels of land, due to a Sh300 million debt. The university could not convince the court to order the sponsor to transfer six parcels of land and other assets to the institution.

KRA is also on the neck of GLUK due to accrued taxes caused by non compliance.

The GLUK students are against the transfer move and have called for a peaceful demonstration.

“We are, therefore, calling all students for a peaceful demonstration on Thursday, November 5, 2020 from 8am from Kibos main campus to CBD Kisumu,” the students wrote.

“We are appealing to GLUK sponsors and related government bodies such as Commission for University Education (CUE), Kenya Universities and Colleges Central Placement Service (KUCCPS) and Ministry of Education to intervene on the planned auctioning to be lifted and allow students to continue with their education under GLUK as private chattered university,” they said.

Atieno however is determined to acquire a 200-acre piece of land, in GLUK’S name, near the main campus.

She stressed that though the loan was taken using GLUK’s name, the money was not deposited in the university accounts. Neither was it used for development of the university. It is therefore impossible for GLUK to repay the loan.