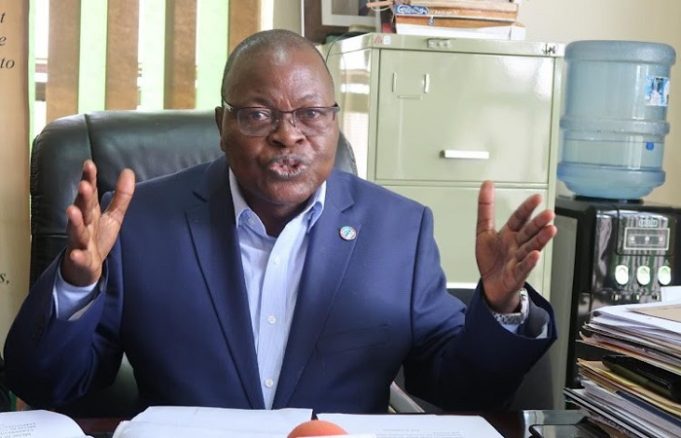 Harmonise Examiners’ For All the Subjects, KUPPET Tells KNEC

The Kenya Union of Post Primary Education Teachers government to harmonize payment rates for Kenya Certificate of Secondary Education (KCSE) examiners to ksh. 100 per paper marked.
Currently,the markers take home different amounts of money depending on what marking subjects. For instance,Christian Religious Education (CRE) subject assessors have only been receiving ksh. 55 per script compared to markers in other subjects like English who get between ksh. 60 and 70 per paper.
To bring to an end the ballooning infights that have been termed as detrimental to smooth examination marking exercise, KUPPET officials yesterday demanded harmonization that they also opined will bring to an end years of protests among professionals undertaking the noble national exercise.

Led by Julius Korir, the union’s national vice chair person,the officials who made an impromptu visit at St Francis Girls High School-Mang’u, a KCSE marking centre in Gatundu North,Kiambu County that was closed on Tuesday evening following protests by examiners decried that the Kenya National Examinations Council (KNEC) has been contravening labour practices to underpay.

We are agitating for these teachers to be paid Sh100 and above per paper marked. Currently there is no harmony and this has brought along sustained in fights This must come to an end,”stated Korir.
Korir said that while the examiners are mandated to go through voluminous pieces of work, the government has continued to pay them peanuts.
He revealed that the assessors have been waking up as early as 4 am and only put down their pens past 10am,a situation that caused them untold suffering.
Speaking to journalists alone at Mangu after they were kicked out of the centre by armed police officers who were by still manning the premises, Korir called on Education Cabinet Secretary Ezekiel Machogu to convene a meeting in 24 hours with key stakeholders to iron out the crisis he said could spread to other marking centres
Ronald Tanui,the KUPPET national assistant treasurer urged KNEC to be consultative with other stakeholders to avert further crisis