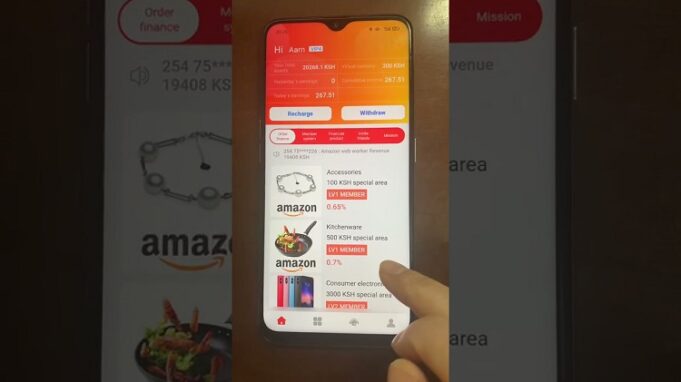 Those who have been convinced by their  potential ‘rich’ referees to join amazon web worker Africa should flee without giving it a second thought, lest they be counted among the ignorant victims.

Any venture that promises members extra ordinary returns on investment despite investing too little or nothing is a SCAM.

Amazon web worker Africa has for the past few months been recruiting members into an unknown venture, with claims that it is a wing of amazon designed to end poverty in Africa. The real amazon however has so far distanced itself from any claims of affiliation with amazon web Africa. Among Africans, Kenya registered the highest number of amazon worker Africa members. You won’t understand how Kenyans lost chunks of money till you get to know how amazon web Africa works.

With its mouther-watering deals, Amazon web worker Africa promises extraordinary Return on Investment within an unrealistic short time. It is based majorly in Kenya, and many Kenyans are falling for it.

How Amazon Web Worker works and why it is a con

Below are some of the Amazon web worker Africa packages and the respective number of tasks.

You will simply earn more from the same tasks, as long as you have a more expensive package. This is clearly shows how online scammers con people. Someone who wants to be earning Kes 1500 to Kes 3000 daily using amazon web worker will have to pay Kes 20,000 first and that is how the beginning of the conning game as even the one who pays ksh. 8000 has equal number of tasks but earns lower. Before you get back your capital on investment, amazon web worker Kenya will have collapsed.

Amazon web Africa is also offering a 10% to 13% referral bonus to members who refer other people to join in the con game. This is a strategy to encourage their active users to invite new members to amazon web Africa. This strategy of referring is popular with almost each Pyramid scheme. Similarly, amazon web worker Africa wants more members to join so that they can use the money that the new users paid while buying the packages to pay the old members.

Apart from completing tasks and referring, amazon web worker active users have chances of investing their money and earning interest at different rates depending on the investment period. The interest rates that amazon web worker is offering are ridiculous. For instance, if you make an investment for 7 days period, your initial investment will grow by 38.5%. Aren’t those rates impossible?

Amazon web worker is not related to the popular Amazon ecommerce site. They are clinging on the same brand name to trick innocent people into thinking they’re legitimate.

Their website is insecure. There is a warning that you shouldn’t enter important information such as password, credit card, etc.