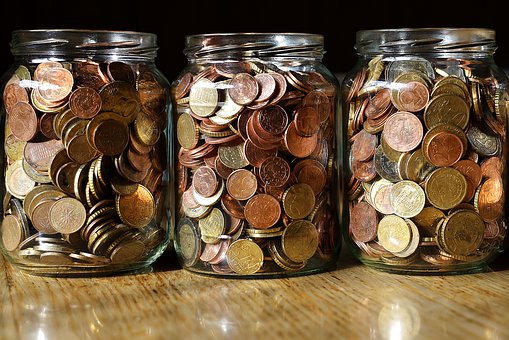 Because of the rising economy, the value of money has shockingly depreciated. This was preceded by loss in value of ten cent and five cent coins. Though valueless in the market, the same coins have great value in electrochemistry.
They help in electroplating metallic equipment. If left overtime, copper in the coins react slowly with oxygen in the atmosphere, leading to the brown colour. This is due to formation of copper (II)oxide. The copper II oxide formed is obtained by putting the coins in weakly acidic solution like vinegar. Copper ions left in the solution can electroplate iron equipments.
Economically electroplating is an essential process, often used to minimise corrosion or improve the appearance of objects. During this process, a thin layer of a desired metal is deposited onto another object.
The object to be plated is attached to the negative electrode of a power source, making the object to gain a negative charge, which attracts positively charged metallic ions from the electrolyte the object is placed in.
We decided to come up with this idea so as to increase the durability of metallic household equipment through copper electroplating. Due to our curiosity, we carried out a couple of experiments in the laboratory and found out that copper ions extracted from an oxidized coin is suitable for electroplating an equipment.

STATEMENT OF THE PROBLEM.

Can copper(II)ions from old coins be extracted recycled to electroplate household equipment?

To extract copper ions from old coins and use them to protect metallic objects from rusting.
To improve the appearance of metallic substances.
To generate income by establishing an electroplating plant.

If copper coins are soaked in vinegar, they lose copper (II)oxide present on their surface. The copper ions in the solution formed can electroplate metallic objects.

The method cannot be relied on to electroplate metals that are very close to copper metal in the reactivity series like Zinc.

Dependent variables
The quality of electroplated material depends on the following parameters:
The duration in minutes
The Concentration of the vinegar
The number of coins used.

The nails should not remain in the solution for too long lest they form thick layers on their surface.

The project can be used to generate income by setting up copper plating factory. This would solve the problem of unemployment in our country.

Rusting involves formation of a brown coat on the surface of iron if exposed to moisture and oxygen. It can be prevented through alloying, coating, galvanization and oiling. Electroplating involves coating metal with another metal. Electroplating is an economically important process. For instance, it can be applied to reduce corrosion or to make objects appear attractive. When electroplating, a very slim layer of the desired metal is embedded onto another object.
The metal being used to coat should be capable of attracting electrons from the one being coated.
This project aims at applying the knowledge of electroplating to improve the quality of another metal by use of scrap copper metal.
The copper that coats the knife is obtained from old coins. However, it exists in the saline solution as cations instead of neutral copper metal.
Knives, Nails and screws are products of steel, an alloy that is mainly composed of iron. The weakly acidic solution dissolves most of the iron and oxides existing the nail, leaving a negative charge. Charges that are opposite attract one another, though the copper ions are attracted more strongly to the nail than the iron ions, making it to be coated with copper. At the same time, hydrogen ions from the vinegar solution and the metal oxides react to produce hydrogen gas, that fizzes from the surface of the nail.

Pour 20cm3 of vinegar in a beaker.
Add one spoon of sodium chloride and stir the mixture
Dip the coins in the mixture and decant after 4 minutes
Dip the nail into the solution
Remove the nail after 4minutes.

DISCUSSION OF THE RESULTS

Iron present in the nail loses electrons and form iron (II) ions which dissolve in the solution. The nail surface remains negatively charged, thus attracting the positively charged copper (II)ions. The copper(II)ions in turn gain the electrons lost by iron to form solid copper which coats the nail.

We as young scientists therefore encourage you to use the kitchen available necessities to electroplate kitchen equipment. We would also like to recommend the government to initiate an organization that deals the collection of old coins. This would ensure the successful ongoing of the project.