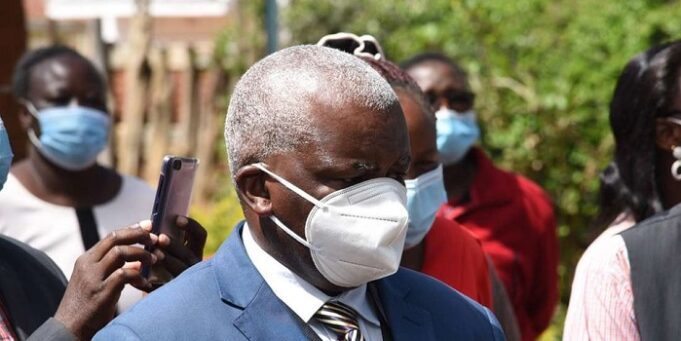 I Could Not Exchange With Magoha Because Of Pupils: Mbaka Reveals

Mbaka is not glad with the withdrawal of human resource powers from the CS but forgives him for he wants a peaceful retirement.

“I have forgiven the CS and I am focused on serving the country as I prepare for my retirement in March 2021 after over 35 years of service in the education sector,” said Mbaka.

Mbaka recounts that the CS was satisfied with their preparations for school reopening once they had taken him around.

“Other officials and I had taken the CS around the classrooms at Langas Primary School and he was satisfied that there were enough desks, thermo guns, and even water points for washing hands,” Dr Mbaka remembers.

“There was, however, change in after he saw the media and turned the focus on me asking why the school was untidy.

“Efforts to explain to him that construction activities were going on at the institution bore no fruit.”

The CS demanded for the reasons why the school was untidy and Dr Mbaka moved forward to explain, but Magoha would not listen to him.

What followed were insults hurled by the CS to Mbaka, in full glare of cameras.

“I have been receiving calls and text messages from my colleagues and directors at Jogoo House and even other officers who have also faced the same wrath from Prof Magoha, urging me to ignore what happened and concentrate on my work,” said Dr Mbaka.

Dr. Mbaka said it is the mandate of the PSC to take action against the CS and therefore he has left everything for them to decide.

“The PSC is my employer and I have left everything to them to decide. Any decision they make is up to them,” said Dr Mbaka.

He informs that he saw no valid reason to engage the CS in exchange of words.

“There was no way I was going to engage the CS in an exchange of words when there were pupils there. It could have been a sign of disrespect,” said the doctor.