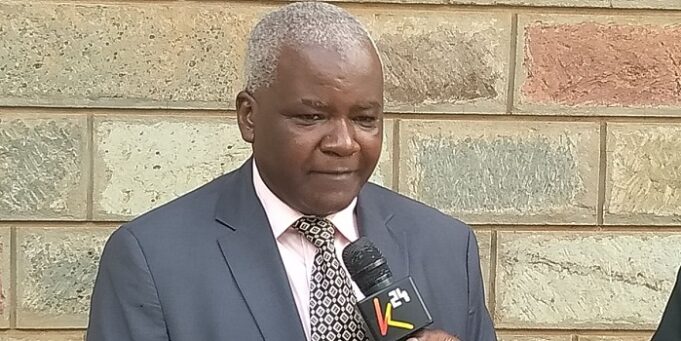 I have no Grudge With Him, Education Boss Abused By Magoha Reveals

A former county director of education, who trended in 2020 after being publicly humiliated by former Cabinet Secretary (CS) Prof George Magoha has hailed him as a gallant hero in the education sector.

Dr Gitonga Mbaka, the former Uasin Gishu County Director of Education confirmed that he has no grudge against the late CS.

In November 2020, Magoha rented the air after a video of him insulting and publicly humiliating Mbaka went viral.

In the clip, recorded during a visit to Langas Primary School in Eldoret, he is heard saying: “Nikisema wewe ni mjinga ni uongo? (If I say that you are fool, would it be false?). He was later kicked out of Magoha’s tour of the region.

‘I Could Not Exchange With Magoha Because Of Pupils,’ Mbaka Reveals

Primary Schools hosting Junior Secondary to be Given New Names

Magoha’s behaviour resulted to a backlash from Kenyans against him, with some education stakeholders calling for his resignation.

But speaking following news of Prof Magoha’s death on Tuesday, the now retired Mbaka has joined many in eulogising him as a gallant leader who valued the people he worked with.

He has also described the former CS as a hero whom he respected highly due to his diligence.

“I have no issues with the late. As my senior in authority, he owes me nothing. He was a gallant civil servant. May his soul rest in peace,” Mbaka said.

“All was going on well during an inspection of coronavirus disease preparedness until Prof Magoha saw some construction materials left behind by workers, which was not my fault, but as the education boss in the county, I had to bear the responsibility,” adds Mbaka.

He reveals that after the incident, he received numerous calls from various people across the country offering him support, even as many Kenyans demanded an apology from Prof Magoha.