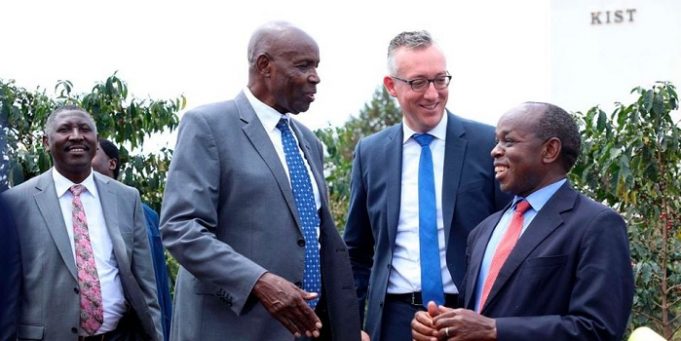 I Never said University Funding Will Be Discontinued, Machogu

The cs backtracked on his earlier declaration regarding state funding of public universities and confirmed that the capitation funds will continue.

According to Machogu, the government is working on budget cuts for other ministries but the money allocated to the Ministry of Education would not be affected. He urged the universities to relax and give him time to transform the university education in this country.

Teachers and Parents Lead Calls For Suspension of CBC

“Nobody is interfering with the money. All the funds for Education are ring-fenced. Nobody ever said that university funding will be done away with. Government is supporting universities and will continue to support them through capitation. Government will never stop funding universities” Machogu said Today at Kiambu Institute of Science and Technology when he officiated at a ground-breaking ceremony for an industrial mechatronics workshop.

“If there are other ways to increase revenue, why not?” said Machogu.

On Saturday, while on a tour of Dedan Kimathi University of Technology, the CS was allegedly said that the government would discontinue funding of public universities.

This statement caused a public uproar, with various stakeholders calling on Machogu to withdraw the statement. He denied ever making the statement.

“The Government has allocated capitation of Ksh. 50 billion for University Education and Ksh 15.8 billion to the Higher Education Loans Board. I also want to assure the public that the government will continue to support university education through regular exchequer support as well as building their capacity to raise more resources through other revenue streams,” Machogu said.

“I’m going to move around each and every university in Kenya because a number of our universities are faced with problems particularly finance,” he said.

He added: “You get them complaining about underfunding and we’re encouraging that they must generate their own revenue because The Exchequer as it is now isn’t going to be able to continue funding more because in Kenya, education takes 25.9 per cent (of the national budget). So, we have to find other ways of creating and generating revenue for universities and they have to look for other revenue streams.”