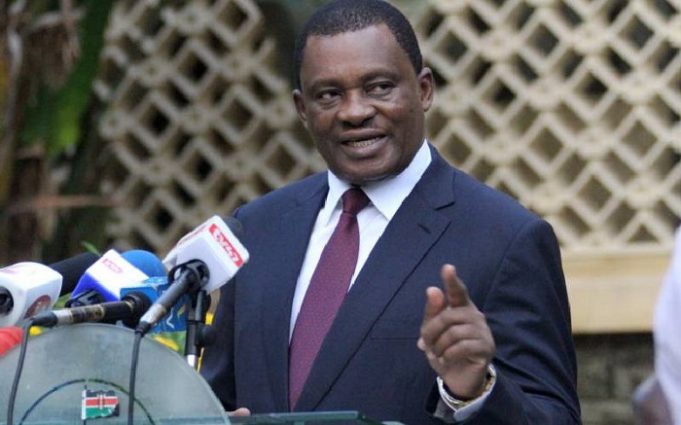 Justin Muturi is a Kenyan politician and a Speaker of the National Assembly of Kenya.

On 28th March 2013, Muturi won the speakership after a second round of voting by Members of the National Assembly, beating former speaker Kenneth Marende by a 219–129 margin.
This post gives a summary of Justin Muturi’s biography.

Don’t forget to drop us a comment and share to your friends at the end of the article.

After his elementary education, he joined Kangaru Boys High School, after which he proceeded to study Law at the prestigious University of Nairobi (1978 to 1981).

Muturi subsequently enrolled at the Kenya School of Law for a Post Graduate Diploma in Law. He became an advocate of the High court of Kenya when he was admitted to the Bar in 1982.

Between 1982 and 1997, Justin Muturi served as a principal magistrate before resigning from judicial service. The resignation was following an allegation of him collecting a bribe to rule in favour of Masaba Hospital founder Dr Geoffrey Joel Momanyi and his wife Fellgona Akothe Momanyi in a case before him.

During that time, he also served as the chairman of the Judges and Magistrates Association.

Upon resigning from the Judiciary, Muturi offered his services to then Siakago MP, Cyrus Ita, acting as his chief campaigner and strategist.

Following the death of MP Cyrus Ita in 1999, he (Muturi) contested and won the Siakago by-elections on a KANU ticket and joined the August House.

In 2002, Justin Muturi was re-elected as the MP for Siakago and served as opposition chief whip and chair of the Public Investment Committee during the 10th Parliament. He served until 2007.

In the 2007 General Elections, he was defeated for the Siakago Constituency MP seat by Lenny Kivuti by a small margin of fewer than 1,000 votes.

He served as a member of the Parliamentary Select Committee on the constitutional review from 1999 to 2004. He was elected KANU National Organising Secretary in Nov 2008 and was the PNU constitution committee chairman during the national constitutional talks from 2008–2010.

In April 2011, he was appointed the chairman of the Centre for Multiparty Democracy (CMD), a civil society group that deals with democracy issues in multi-party politics.

Currently, Muturi is the attorney General of the republic of kenya.