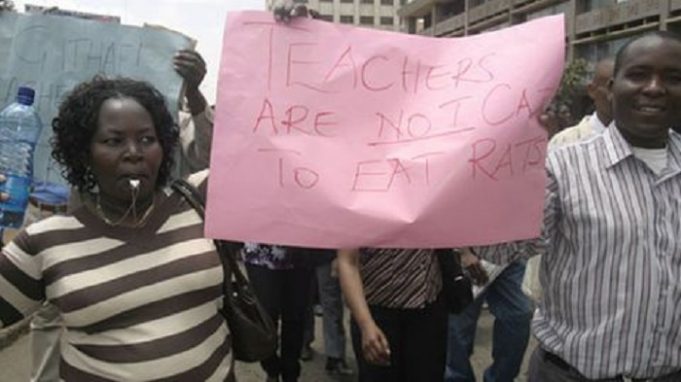 KCPE, KCSE Exams in Crisis as A Teachers’ Union Sets To Give A Strike Notice

The Kenya Union of Post Primary Education Teachers (Kuppet) has revealed that it will issue a strike notice today after their demand for fresh salary talks failed.

The union said it has been pushed by the refusal by the Teachers Service Commission to heed its call and reopen negotiations into the 2021-2025 Collective Bargaining Agreement (CBA).

According to the revised education calendar, the 2021 KCPE examinations will be done between March 7 and 10, while KCSE starts on March 11.

The Kenya National Examination Council (Knec) says 2,056,719 were registered for the tests. Teachers administer and mark the tests.

According to Secretary-General Akello Misori, the union wrote to TSC on January 17 demanding the re-opening of the CBA within 21 days.

“Upon the expiry of the 21 days, the union said it would review the commission’s response before convening its organs to give further directions on the next course of action,” he said.

Misori confirmed that KUPPET received a response from the TSC. “All the commission has done is to acknowledge our letter and promise to respond at a later stage after ‘interrogating’ the contents.”

He said the union had no other choice but to engage in industrial action.

“In the absence of a clear-cut commitment to re-open the talks, we have no idea how long the interrogation might take and our members do not have the patience to wait any longer for a salary review.”

Relief To Teachers As TSC Retreats On Biometric Registration Of Teachers

The union had asked for a salary raise of between 30 and 70 per cent for the highest paid and the lowest-earning teachers.

Kuppet and the Kenya National Union of Teachers (Knut) signed a non-monetary CBA with the employer, drawing uproar from teachers. The CBA only provided for enhanced maternity and lenient transfers to cushion couples.

Pushed by their members, both unions called for fresh talks, saying the economy had recovered from the Covid-19 pandemic shock.

Knut Secretary-General Collins Oyuu has also indicated the union will be asking for more negotiations.

“The last CBA catered much for administrators but this time round, we will make sure that teachers will have a chunk of what will be added in their salaries,’’ said Oyuu.

Knut has, however, not said it it will be making fresh demands. The union had proposed a salary increment of between 120 per cent and 200 per cent.

Misori yesterday said the union had no option but to put the government on its toes.

Misori noted that when the unions and TSC signed the CBA on July 13, last year, there was a freeze in salary reviews due to poor economic performance occasioned by the Covid-19.

“The excuse of Covid-19 should no longer be used to deny teachers their deserved salary reviews,” he said.

Kuppet has also listed a raft of allowances that must form part of the negotiations with the employer.

The union wants commuter allowance raised from Sh5,000 to Sh8,500 and from Sh16,000 to Sh20,800 for the lowest and highest paid teachers respectively, which translates to a rise of between 30 per cent and 70 per cent.

The union also wants leave allowance, which ranges from Sh6,000 to Sh10,000, pegged to one-month salary for every grade.

Also in their demands is risk allowance for science teachers, starting from Sh5,465 for the lowest paid and Sh30,587 for the highest-paid.