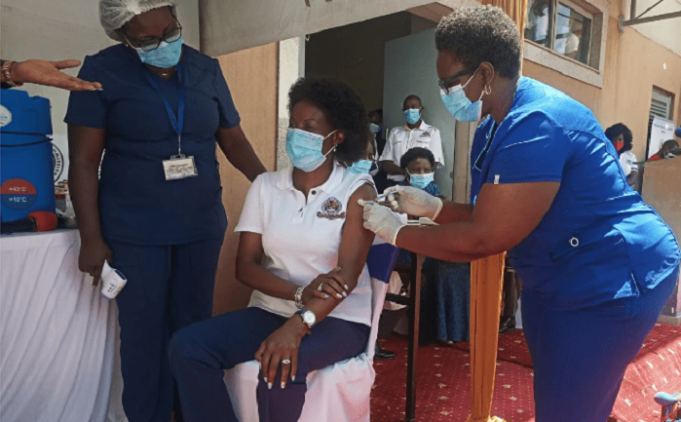 Kenyans To Wait Longer For The second Dose Of Covid-19

Kenyans who received the first dose of the Oxford AstraZeneca vaccine will wait longer for the second shot, as per the revelations of a  senior Ministry of Health official.

Only 172,000 doses remain for the second Covid-19 vaccination while 130,000 vials are expected from the World Health Organisation Covax programme.

What that means is that over 600,000 out of the more than 900,000 people that have received the first shot have no certainty of getting the second.

National Vaccine Task Force chairman, Willis Akhwale, confirmed that the available doses would cover those who received their initial jabs in March.

“There are challenges globally but we are going to get the vaccines and administer them to everyone in small bits. We hope to get another batch this month but we cannot give an actual date,” Dr Akhwale said.

The first shots were administered in Kenya from March to the end of May.

“We expect more doses from Covax. There are delays, but they will come,” Dr Akhwale said.

The ministry is racing against time to acquire the drug, having extended the timeline for inter-dose administration to 12 weeks from eight.

The shortage of doses has been occasioned by the ban in exports by India’s Serum Institute, the world’s biggest producer of vaccines, which could not live up to the international demand following a sharp rise in coronavirus cases in the country.

The Covax scheme needs more than 20 million doses by the end of this month to distribute to countries.

With the Covax challenges, the Kenyan government has been looking for means of getting alternative vaccines.

Dr Akhwale said of the 30 million Johnson and Johnson vaccine doses the government has procured through the African Union (AU), the first batch of 10 million is expected in just over two months.

“Our tentative date for receiving the next batch that we have procured via the AU is August,” Dr Akhwale told reporters in Nairobi.

“This will be used for phase two vaccinations. If it comes earlier than that, the better. We hope August will be the latest month the vaccine will arrive in Kenya.”

The hope of Kenyans is pegged on donations from wealthy countries who are working in collaboration with the Covax programme for equity in distribution.

Before then, those who have received the  first dose of the Oxford AstraZeneca vaccine will only have about 70 per cent protection.

Scientists and other experts do not know how long this immunity will last.

Research published by AstraZeneca in February showed that the first dose alone reduces disease transmission by up to 67 per cent.