Despite KCPE and KCSE exams being released a couple of months ago, the Kenya National Examinations Council (Knec) has not yet paid its contracted professionals who overseen the exams.

Among the contracted professionals who are yet to get a penny from KNEC are; Centre Managers (Principals and Head Teachers), Supervisors, Invigilators and Security Personnel. So far Knec has only paid teachers who were involved in the marking of KCPE and KCSE exams a fraction of their wages, with the remaining fraction expected some time after elections, as it is the traditions of KNEC.

KCPE examiners only marked Insha and Composition papers. The marking of multiple-choice questions was done by the modern Optical Mark Recognition (OMR) which electronically scored the papers.

The delayed payments have caused frustrations and protests from teachers who supervised and invigilated the exams.

Teachers have been questioning why Knec is delaying their payments yet the KCPE and KCSE results were released long ago.

KNEC had in February warned that it will only make payment to those who officially register their details on the Cp2 platform.

However, Treasury CAS Eric Wafukho informed the examiners that there should be no panic since everything will be taken care of.

According to Wafukho, the government rolled out financing of the whole examination activities including paying teachers, drivers and security personnel through the treasury and they expect that the

process will be smooth.

He maintains however that all logistics must be followed prior to the payment.

Earlier speculations revealed that the government coffers are dry, hindering it from meeting the obligation of paying teachers who manned the exams.

The contracted professionals expect their wages as summarized in the table below. 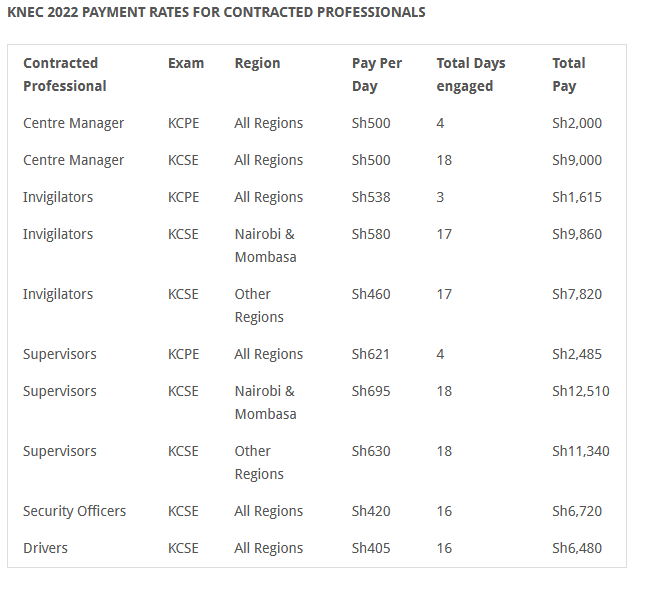