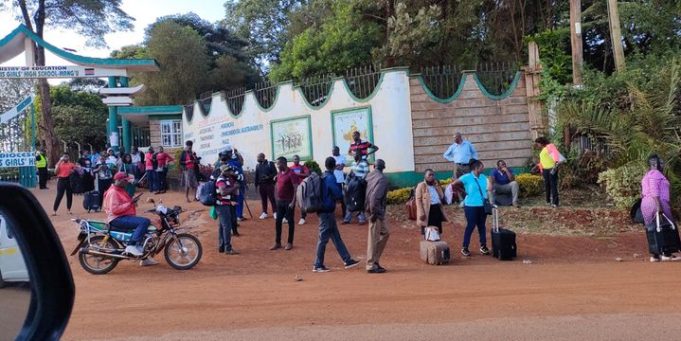 Protests by striking teachers disrupted the marking of Kenya Certificate of Secondary Education (KCSE) examination papers at a centre in Kiambu County yesterday, forcing education bosses to scramble to avert the crisis that could derail the release of the results.

300 Additional Teachers to be Recruited in Laikipia this Month

Knec chairman Julius Nyabundi said in a statement yesterday that the centre’s chief examiner had been replaced “as a compromise to ensure a smooth progress of the marking exercise.”
Prof Nyabundi, however, said the council could not revise the marking fee upwards as it could not find an extra budget midway.

“The council, therefore, resolved to allow the examiners who were willing to continue with the marking process to do so uninterrupted,” Prof Nyabundi said.

He assured the country that the marking was proceeding well and results would be released on time.

Teachers were dissatisfied that their grievances had not been met and opted to quit the exercise, forcing Knec to hire replacements.

By yesterday noon, the teachers were clearing to leave the station amid reports that over 1,300 examiners marking CRE Paper One had been ordered to leave.
They said about 500,000 scripts were unmarked and they were expected to complete marking by Friday or Saturday.

“We just want them to pay us well keeping in mind the hard economic times in the country. We wake up at 4 am and sleep at 10 pm,” one of the examiners protested. In a separate briefing, the Kenya Union of Post Primary Education Teachers (Kuppet) said their members had demanded an increase in pay for marking CRE Paper One from Sh55 per script to a minimum of Sh100.

They also wanted an increase in the amount paid for other subjects. The teachers also accused Knec of forcing them to work under very stressful conditions with no freedom whatsoever.
At the school, the education bosses were shouted down by the striking teachers.

Efforts by Njeng’ere to calm them down were futile and in the afternoon, Machogu and Kipsang visited the centre. In another video, Machogu is seen trying to quiet down the teachers but is met with even more resistance.

Journalists were ordered out of the premises on instructions by the education bosses. By yesterday evening, the examiners had been left stranded looking for means to go home.

In Nairobi, Kuppet Secretary-General Akelo Misori said it had become a trend that, during every national examination cycle, Knec fails in its obligations to provide humane working conditions.
“Such practices violate constitutional rights to fair labour practices and access to the highest attainable standard of health as enshrined in Articles 41 and 43,” he noted.

Misori accused Knec of failing to address recurring issues, forcing examiners to employ different methods of protest before their grievances are addressed.

He added that Kuppet was saddened by the crisis at the centre and that the stalemate could end up impacting the credibility of the marking, and the outcome of the process and endanger the health of the examiners.

Kuppet vice chairperson Julius Korir lauded the examiners for fighting for their rights and called on Knec to address the challenges. He said teachers were poorly fed and sleeping in dorms, which he termed unacceptable.

Misori said the union was also receiving complaints from other centres. “Examiners at Moi Forces Nairobi are not allowed to rest during the weekend or go to church,” he added.