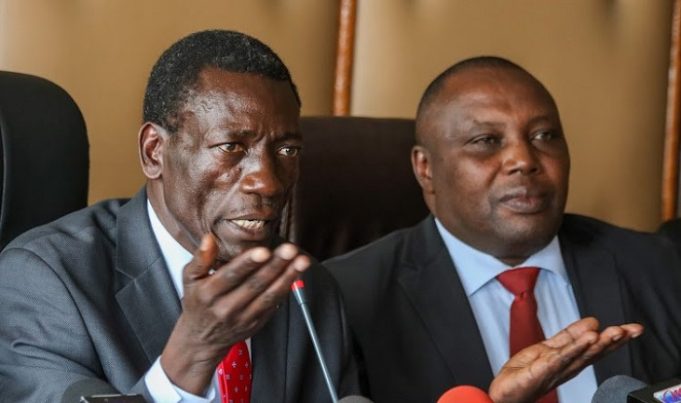 Kenya National Union of Teachers and Kenya Union of Post Primary Education Teachers have cited inadequate funds as the main challenge in CBC.

The two unions made these demands when submitting their views to the Presidential Working Party on Education Reform on Wednesday.

Kuppet secretary general Akello Misori said despite education gobbling up almost 29 per cent of the national budget, a lot of the funds are spent on other departments.

“By implication, the total recurrent and development expenditure to basic education, excluding teachers’ salaries and trainings, has been allocated approximately Sh120 billion,” he said.

Misori noted that the lack of adequate funding is causing a ripple effect to the parents who end up carrying the burden of the deficit.

“This is a drop in the ocean and it explains why parents are being asked to buy all manner of school learning materials,” he said.

Misori said these funds are divided among three state departments and another almost six state agencies and commissions.

“It’s to be split with TSC receiving 50 per cent, public universities at 20.9 per cent, non-salary allocation to basic programmes at 21.7 per cent and 3.6 per cent to Tvet,” he said.

On his part, Knut SG Collins Oyuu addressed the issue of capitation sent to primary and secondary schools.

Oyuu said the figures should be increased to allow smooth running of the new curriculum.

“Even most of these problems which you see that teachers are asking for chicken, are caused by less funding,” Oyuu said.

In the 8-4-4 system, primary school learners are funded at Sh1,430 per student and Sh22,244 per year under the Free Day Secondary education.

“The government should review and enhance capitation amount per child in accordance with the cost of living,” he said.

In 2019, there was a proposal to implement the differentiated unit cost in funding basic education institutions.

Primary and secondary school learners would be funded according to the subjects they take.

Each learner would be funded based on the subjects under the new curriculum through a system called Differentiated Unit Cost.

The pathways are STEM, arts and sports science, and social sciences.

The proposal, the second version of the document, was presented before Parliament’s Education committee and was to be adopted by the House and assented to by the President.

But it did not proceed.

He said the working party should review the policies to ensure only poor learners are beneficiaries.

“Provide not less than 50 per cent of school fees for other less endowed students and consider channeling bursaries through BOMs,” he said.

The team had a raft of issues to be addressed in the education sector.

On CBC, the team led by Raphael Munavu is expected to elaborate on the conduct of key tenets in the curriculum.

“Implementation of aspects guiding the competency-based approach including but not limited to value-based education, community service learning, parental empowerment and engagement,” the gazette notice reads.

The team will also evaluate the assessment of learners, the quality assurance and the standards of CBC.

The higher education subsector will also undergo reforms, according to recommendations given by the task force.