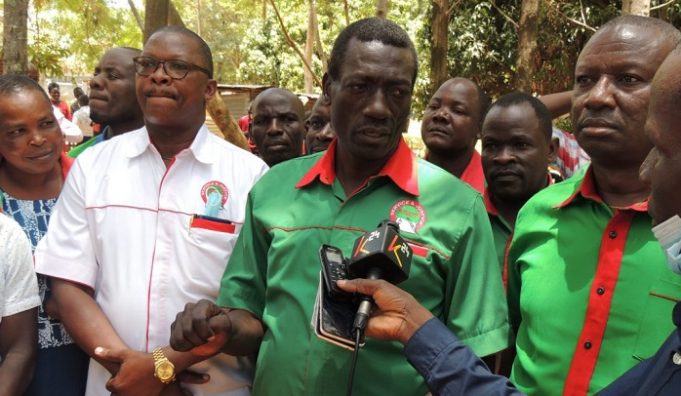 The disappointed delegates protested against the attempts by Collins Oyuu and psychophants to increase the retirement age from 60 to 65, which they proposed during last year’s Malindi meeting.

A section of members walked out of a Special Delegates Conference (SDC) at the Kasarani Stadium Indoor Arena.

KNUT Secretary-General Collins Oyuu has however insisted that the union will implement the resolution, which was among the 15 that had been proposed by the National Executive Council (NEC) in their past meetings.

The irritated delegates declined to listen to him and shouted him down during his speech. They shouted ‘go home” go home’ “go home’ and finally walked out protesting.

Oyuu will be age 60 years in three months’ time and teachers feel that he and his allies are forcing this amendment so that they can overstay in office to benefit from deals and misappropriation of teachers’ hard-earned cash.

242,406 Best Teachers Have Been Selected To Officiate KCPE, KCSE: TSC

Most teachers are also frustrated with Oyuu for signing a non-monetary Collective Bargaining Agreement (CBA) and allowing the controversial Teacher Professional Development (TPD) to be launched.

The proposal to change retirement age was under resolution number 11 of allowing NEC to conduct minimal constitutional amendments.

The last review was done on December 2015, seven years down the line. Prior to that, there was a review in 2010 and 2013 even as the Constitution demands that it is reviewed after every five years to capture emerging issues and to expunge those articles that are obsolete.

Sixty is the same age the Teachers Service Commission has set for the retirement of its employees.

“We had come to the special delegates conference, everything went well until the proposal to increase the retirement age from 60 to 65 came, which we have refused. This is because it has been imposed on us and that is why we have walked out in anger,” said a female delegate who requested anonymity.

“When you have retired, you cease to be a teacher, so if you extend your term of service, whom are u representing? It means you will be going to lead teachers when you are not a teacher and this means TSC will not recognize you,” added another delegate.

“The procedure of a meeting is when you want to oppose something, you bring in a statement and there must be someone to second it. But nobody came to the microphone to second it.” Said Oyuu.

Stanley Mutai, who is also very closely related with Oyuu and is the current Knut first vice national chairman is also set to retire this year.