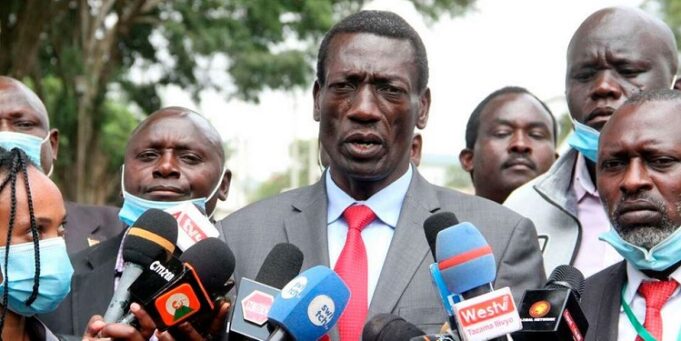 The Kenya national union of teachers, KNUT is headed for a CBA with the teachers’ service commission, TSC. Judging from secretary general Oyuu’s current talks in gatherings and interviews, KNUT is going to sign the cashless CBA.

“There are several types of CBA and we must understand this. Monetary CBA, which focuses on financial gains for the workers and non-monetary CBA that focuses on the welfare of workers,” Said Oyuu on a Sunday interview, where he hinted that KNUT might sign the non-monetary CBA, if it is all TSC can offer and bearing in mind the situation of the country.

The Kenya National Union of Teachers (Knut), which had previously objected to a CBA without monetary gains as proposed by TSC, is now climbing down and suggesting a possibility of having an agreement with a condition that the suspension only lasts two years. What this implies is that the cashless CBA will end in 2023, after which another two-year monetary CBA will be signed, depending on the economic situation of the government.

TSC has scheduled a meeting with teachers’ unions to negotiate the proposed CBA, as pressure mounts on the latter to accept a deal without monetary gains.

The commission invited the unions to the July 13 meeting to discuss the 2021-2025 CBA. At a meeting held on June 29, TSC had said it would not engage in money-based CBA.

Kenya National Union of Teachers (Knut) secretary-general Collins Oyuu yesterday said they were willing to get into an agreement with the employer on a two-year CBA that captures all other aspects of terms and later sign a different CBA on financial gains.

“Salaries and Remuneration Commission (SRC) has suspended the review of salaries and teachers are not exceptional, but must agree with the TSC that teachers’ salaries will be reviewed immediately after the lapse of the suspension period depending on the country’s economic performance,” said Mr Oyuu.

TSC’s stand on non-monetary CBA rose from advice from the SRC that put a freeze on the review of salary structure.

In the June meeting with teachers’ unions, TSC offered promotion of teachers in arid and semi-arid land (ASALs) and hardship areas, enhanced package on maternity leave to 120 days and paternity leave of 21 days with full salaries, as well as transfers of couples to teach in schools near each other.

“We are looking at a CBA that does not break families. Let us not only concentrate on the financial gains because the CBA has so many aspects,” said Oyuu.

The new CBA seeks to recognise teachers’ leadership and technical roles in realization of the CBC within and outside the classroom, which had been ignored in the evaluation tool previously used by SRC in crafting teachers’ job descriptions.

This also implies that employees can enjoy annual increments and promotions from one grade to another through common cadre transitions and competitive interviews at constant salary bands, allowances and other benefits.