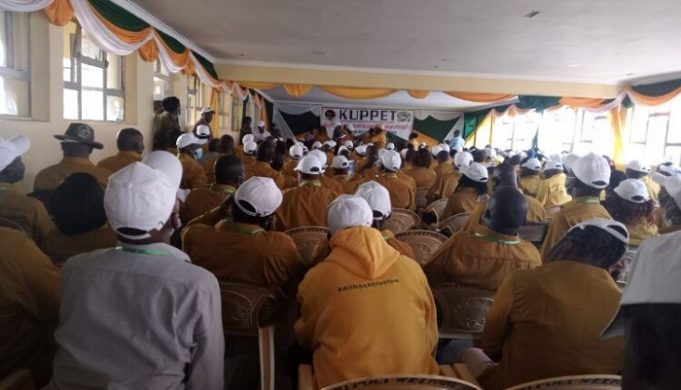 Kenya Union of Post Primary Education Teachers (KUPPET) Kitui branch leadership has called for removal of Grade CS in teacher promotion since it has been the main cause of the stalemate between teachers and the Teachers Service Commission (TSC).

The branch Executive Secretary Kioko Mutia together with his Chairman Augustus Mutuvi noted that Kitui has over 100 deputies who are acting at C4 and others at C3.

“One may wonder why these deputies are not promoted yet there are so many schools without deputy principal and principals,”said Mutia.

The union leaders took exception after TSC Secretary Nancy Macharia appeared in Parliament recently and said that there is no teacher who has stagnated yet in reality there are teachers who have stagnated for 17 to 20 years in job group C3.

He added that there is need for promotion of C2 to C3,C3 to C4,C4 to D1 then abolish C5 noting that Kitui has about 3,000 teachers in dire need of promotion.

The two leaders called for re-advertisement of TSC vacancies which will address stagnation.

“In fact this could be a New Year gift to us teachers if addressed.Teachers were very optimistic waiting for promotion but we were shocked.Kindly motivate the teachers,”Mutia urged.

The unionists further added that the recent job vacancy advert from TSC was for primary schools and not secondary schools. The two also called for promotion of tutors in Teacher Training Colleges (TTCs) who have been forgotten as well.