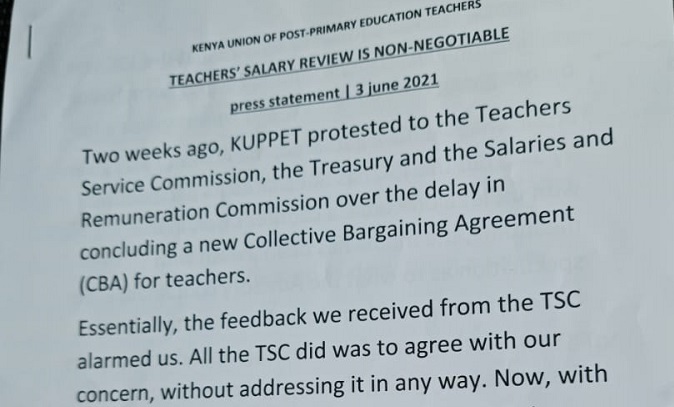 The Kenya union of post primary teachers, KUPPET, have maintained that all teachers want is a review of their salaries this year.

KUPPET revealed that it had written to TSC, treasury and SRC two weeks ago over delay in the concluding collective bargaining agreement, but received a shallow response from the commission.

“The response we received from TSC alarmed us. All that TSC did was to agree with our concern, without addressing it in any way. Now with barely three weeks to the expiry of the current agreement, the governments indifference to the process has caused intense anxiety and tension in the teaching fraternity,” reads part of KUPPET’S Press statement.

KUPPET decried the government’s act of dragging its feet on the CBA negotiations for more than a year, despite the union diligently discharging its obligation of pushing for the talks.

From KUPPET’s sources, SRC gave the advisory but TSC never shared with them, not even a counter offer. KUPPET alleges that the media has been awash with the speculations as to what the CBA contains and that teachers have been treated to what appears to be a carefully choreographed coverage in the press, insinuating that the government will not provide any funds for a new CBA this year.

The media coverage has blamed covid-19, economic recession, and other factors for the inability of the government to review teachers’ salaries.

The union claims that cost of living has skyrocketed, teachers’ workloads have increased sharply under CBC, teachers’ roles have expanded to mitigate pandemic, there is a biting teacher shortage, thus there is no justification to deny teachers a salary review.

” If anything, the government has raised the salaries for cadres like MCAs, and administrative officers, who are already so handsomely paid, without any demand from them.”