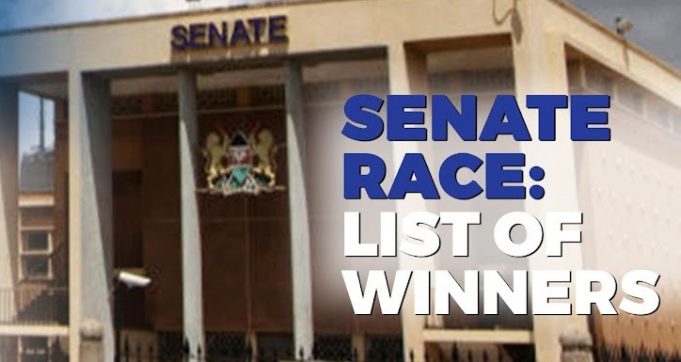 Homa Bay County-Moses Kajwang’ of ODM has retained his seat after garnering 353,882 votes. His KANU opponent Thomas Ojanga got 18,690 votes.

Kisumu County-ODM’s Tom Ojienda has clinched the seat with a vote count of 413,121 as Enos Kudi Okolo of Jubilee came second with 15,575 votes.

UDA party candidate Allan Chesang has clinched the seat with a vote count of 123,793 votes.

UDA party candidate Jackson Mandago has clinched the seat with a vote count of 252,800 votes.

UDA party candidate Boni Khalwale has clinched the seat with a vote count of 247,860 votes.

Issa Boy of ODM retained his seat with after garnering 52,772 votes . In second place was Antony Yama of UDA who got 41,762 votes.

Faki Mwinyihaji has retained his seat using an ODM ticket after geting 11,040 votes.

He defeated the Outgoing Governor Samuel Tunai who got 117,869 votes.

The outgoing governor Kivutha Kibwana, the leader of Muungano party got 59,034 votes.

The incumbent Senator Enock Wambua has retained his seat after bagging 191,317 votes.

The Wiper candidate floored Stephen Kilonzo of UDA, who got 49,064 votes.

UDA’s Karungo Thang’wa has won the seat after bagging 579,411 votes.

George Maara of Jubilee came in second with 112,304 votes.

UDA’s Bishop Margaret Wanjiru came second after she got 554, 091 votes

Visit after every four minutes for live updates.