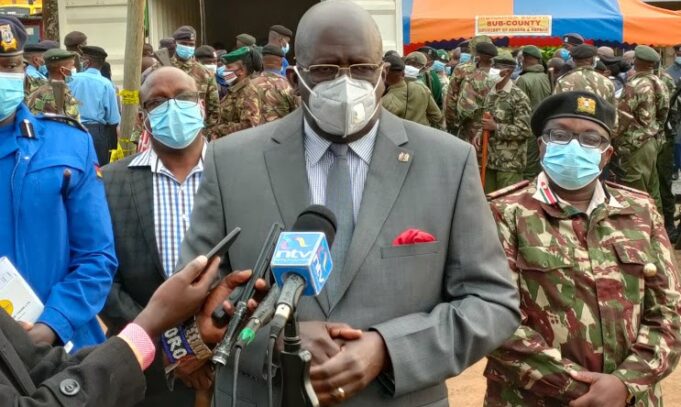 Schools near the examination containers will be the last to pick their exam papers, Education Cabinet Secretary said as the ministry tighten any possible loopholes for examination leak.

These are among the new but tight rules the Ministry has put in place to curb cheating ahead of Monday’s, March 7 expected start of the Kenya Certificate of Primary Education (KCPE).

Education CS Professor George Magoha said the containers will be opened at 6:30 in the morning instead of 6 am as has been in the previous years, to reduce the time officials come into contact with the papers.

“There is no reason to release the question papers an hour before exam time for the schools that are near containers. They can wait until it’s about 20 minutes to go,” said the CS when he was commissioning new classrooms in Mombasa.

Cartels are Planning To Leak Exams On Telegram: Magoha

However, these fresh rules have elicited concerns among education stakeholders with some arguing that delaying the collection of exam papers may only achieve little in regard to exam cheating.

Instead, allegations have been lodged against the Kenya National Examinations Council (KNEC) for being bribed by principals and parents to release improved grades for particular students and schools.

Should there be a suspected case of result manipulation, the educationist urged for comparisons of previous performance records for the schools in question.

“It’s not a wonder that some schools have had the results of their schools ‘ready’ even before the marking is done. The rule of posting results in a common KNEC server before they are released is subject to manipulation. Schools are paying a lot of money to have the exams manipulated to their favour,” said the official.

He cited boarding schools as beneficiaries of such arrangements where they get papers prior to the exam period and have the candidates revise the tests at night.

“We don’t know who is setting these tests and whether it is done locally or outside the country. The process is subject to influence because the papers could go out. Leaked papers do not necessarily have the KNEC logo,” he argued.

By the time of going to press, KNEC had not responded to the allegations. At the same time, delaying release of question papers could inconvenience schools in far-flung areas.

“Schools do not have enough vehicles and you’ll find so many teachers squeezing in one police land cruiser,” said a secondary school principal.

Anthony Wanyoike, a headteacher at Kirawa Road School in Kitisuru claims that the time review had not been communicated to teachers.

“In the last briefing with the ministry officials on Friday there was no mention of such review but we will go with the Ministry’s guidelines,” said Wanyoike.

On the last day, they will write a Social Studies and Religious Education paper. Candidates with visual and hearing disabilities will have additional time for particular tests.

The Kenya Certificate of Secondary Education (KCSE) will start next Monday and the main examination will run from March 14 to April 1.

According to the examination’s council, a total of 2,056,719 candidates have been registered for KCPE and KCSE.