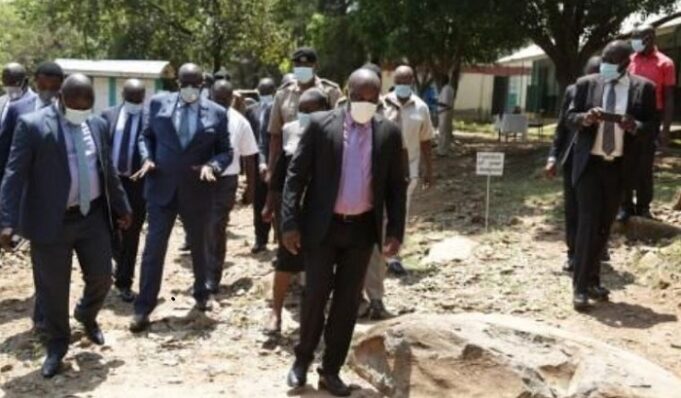 A bodyguard of education cabinet secretary George Magoha has been accused of sexually harassing and threatening two journalists in Kisumu. The incident occurred on 19th November at Kosawo primary school in kisumu, where professor Magoha was inspecting the government procured economic stimulus desks.

A journalist from nation media group unintentionally bumped into the bodyguard while he was struggling to capture pictures of the CS with the pupils. The body guard is said to have followed him to the exit and squeezed his genitals mercilessly.

“Nation Media Group Photographer Ondari Ogega accidentally bumped into the said officer whose identity is not known and even apologized. However, as he made his way out of the classroom, the CS’s bodyguard followed him and reached for his fly before squeezing his genitals and threatening to do more outside the classroom,” explained  Kisumu Journalists Network (KJN) chairman Rushdie Oudia.

The lawless bodyguard harassed yet another journalist during the event. He went further and grabbed Viola Kosoma’s backside and pushed her to pave way for the ‘all powerful’ cabinet secretary.

In some earlier videos, the same body guard had been captured by some journalists, harassing another journalist in Vihiga County by forcefully inserting his fingers into the journalist’s mouth.

The Media Council of Kenya (MCK) has pled with the government to take a necessary action against Magoha’s bodyguard for accusations of sexually harassing and threatening the two journalists in Kisumu.

“We urge the VIP security detail to respect Journalists as they are just doing their job by asking questions; they are not attacking the VIPs you are guarding. These journalists are not armed,” said Mr. Omwoyo.

The incidents have not only instilled fear among the journalists but also amount to sexual assault and suppression of the freedom of the press as enshrined in Articles 33 and 34 of the Kenyan Constitution.