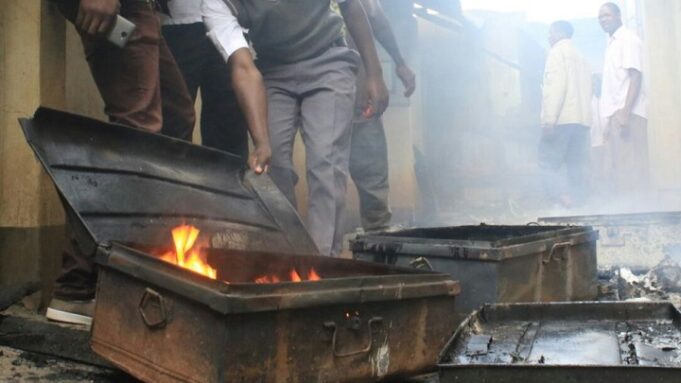 This Is Why Magoha Declares Techers, Prefects On Duty Will Be held Responsible For School Fires

Education Cabinet Secretary Prof George Magoha has announced that teachers and prefects on duty will be held responsible for school fires.

Magoha said that in almost all the fire incidents reported across the country, teachers usually report that they do not know the causes of the fires yet they are paid heavily to run the institutions.

Magoha insisted that learners cannot be more intelligent that the teachers yet teachers are professionals in their fields.

“The role of the teachers is to enforce discipline and offer counselling to learners. Don’t allow learners to be more intelligent than you,” Magoha said during an education stakeholders meeting in Kisumu.

The CS was reacting to escalating cases of fire incidences in public boarding schools and some day schools in Kenya. These fire incidences had been there in the past, especially towards national exams but have been on the rise after schools reopening after the covid-19 break.

Experts attribute the fire incidences to poor parenting. Others attribute them to lack of co-curricular activities, which make learners to redirect their energies elsewhere.

It is not going to be easy for the teachers and prefects on duty since incidences have also been reported of learners beating their teachers or threatening them with dangerous weapons.

He directed teachers to ensure that dormitories are inspected and locked each morning, and the learners’ movements monitored. “We should ensure there are no more fires in schools by having a system that works to tame the vice.”

Magoha urged learners to remain disciplined and warned that investigations would reveal the identities of those behind the fires. Their details, he added, will be included in a database “that can be used against them in their entire career.”

Magoha said it was time to hold a national conversation on the issue of corporal punishment and urged parents to show more concern for their children.