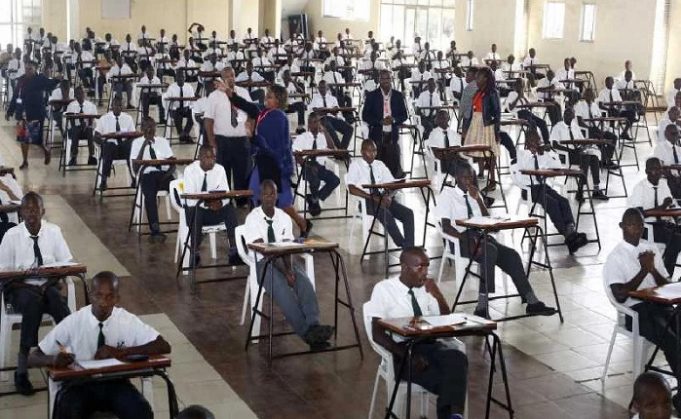 Man Arrested For Sitting KCSE Exam on Behalf of His Father

The kenya certificate of secondary education, KCSE, which began Yesterday, was marred with isolated cases of impersonation, alongside other malpractices.

In Busia for instance, a 26-year-old man was arrested for sitting the exam on behalf of his father, while a 20-year-old Kisii University student was also found impersonating a candidate in Kisii.

Matayos deputy county commissioner Kipchumba Ruto said Barasa was a former student at Bujwang’a Secondary School in Funyula subcounty. He used a police abstract to gain access to the exam room. His father was registered as a private candidate at Our Lady of Mercy within Busia township.

In Kisii county, a university student was arrested for sitting an exam on behalf of a candidate. Brian Angwenyi, a third-year student at Kisii University, was sitting the English Paper One on behalf of Nyamweya Martin at Kiamabundu High School in Kisii Central, Nyaribari Chache subcounty.Police said the candidate was on the run. The suspect was held at Kisii Central police station.

Nyaribari Chache subcounty police chief Peter Kimani said the suspect was being interrogated before he is arraigned in court.

“We are in the preliminary stages of the probe and as soon as we finish he would be taken to court,” Kimani told journalists outside his office.

“The primary suspect had registered as a private candidate,” he said.

He said that the two would still carry on with the exams, urging all candidates to concentrate on their exams and avoid any malpractices.

Speaking in Kiambu county later in the afternoon, the CS said the test had started without major hiccups.

“We have not had any serious incidents. We dismantled the cartels in primary schools exams. We have noticed that they have formed another one,” he said.

Magoha said mobile phones continue to cause more trouble during the administration of the exams.

“We still insist, centre managers should not allow any mobile phones in those exam rooms,” he said.

The education boss further said the ministry will be in a position to track down anybody sharing photos of exam papers.

“If we see the photo of an exam paper then we will be able to know. We have our way of knowing where it has come from.”

Directorate of Criminal Investigation also said the old practice by crooks selling fake exams is back.

Last week, a student from a local university was caught by agents from the Kenya National Examination Council and the DCI.

He had created several Facebook pages from where he peddled fake 2022 examination papers at Sh2,600 for Science papers and Sh1,600 for Humanities.

The examiners said this year the challenges have been compounded by the insecurity in Baringo and Lamu.

In Baringo, schools were provided with extra security to protect the exam papers, students and the invigilators.

The Ministry of Education said no security incident was reported on Monday but nothing will be left to chance.

Magoha said there would be special considerations for candidates from areas that have been hit by insecurity during marking.

Yesterday, he said they also have a challenge regarding the second exam paper each day because it is stored in school for a long time and might be opened.

Speaking in Mombasa, Magoha warned teachers against opening the papers.

“I want to warn any teacher who feels brave enough and opens the exam papers beforehand. We shall come for you,” he said in Mombasa.

“We will not have mercy for those arrested. We shall be quite dictatorial for the sake of our children because we must protect them.”