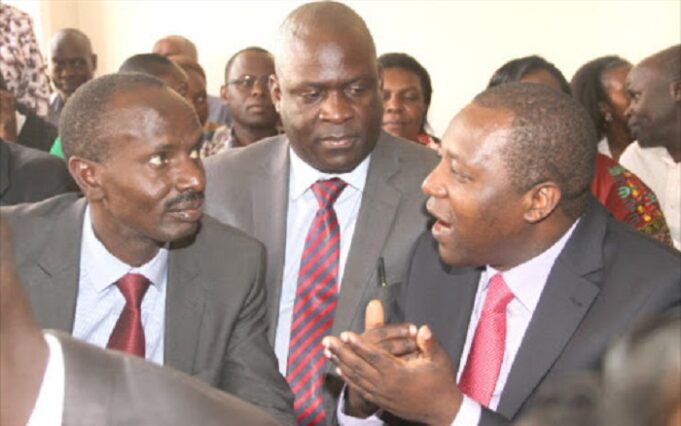 Milemba To Mediate Between KNUT and TSC To Solve Stalemate

The Kenya union of post primary education teachers, KUPPET National chairman Omboko Milemba, has offered to mediate in the stalemate involving the Kenya national union of teachers and the teachers’ service commission.

Milemba asked KNUT secretary general Wilson Sossion to sit down with TSC and agree to withdraw all the court cases that have led to differences between them.

The unionist said that he was very ready to mediate between KNUT and TSC, to ensure they come to an agreement so that teachers who were removed from KNUT can return to make the union stronger.

“We do not want KNUT to die and we don’t want a weaker union either. We do not have any members of KNUT in our union as it is being said by people and we are not welcoming any.” Milemba said.

KNUT had a membership of 280,000 before TSC decided to activate an online resignation platform for Knut members. Currently, out of the 350,000 teachers employed by TSC, 110,000 are KUPPET members, 13,000 are KNUT Members while the rest are unionless.

Misfortunes hit the former giant union after ODM party nominated Knut secretary general Wilson Sossion to Parliament in 2017 to represent the interests of workers. This did not go down well with the Jubilee government and teachers’ employer, TSC.

At one point, Sossion was stripped of his registration as a teacher by TSC before going to the High Court seeking reinstatement.

Step by step guideline in switching from your outlook365 to office365