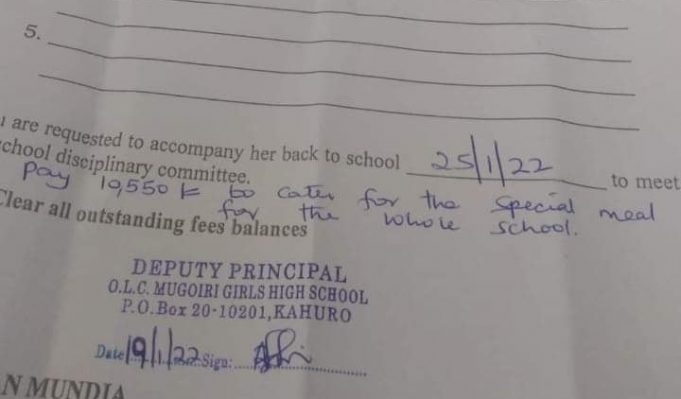 Mid this week, 17students Form One girls at Mugoiri Girls High School, Muranga were sent home after leaving for the second serving of the special meal served on Sunday.

The suspended students were instructed to report back to school after two weeks, loaded with 10,550 to make arrangements for food for their parents and the entire school.

This move has caused a lot of stir in the social media, with netizens faulting the decision taken by the school and questioning the price of a plate of food in that school.

The story has however taken a different twist with the principal distancing herself from the decision, and blaming it on one of the teachers on duty who was in school at that time.

The principal, who was responding during a phone interview with one of the media houses, accepted that what the girls did was wrong and that they were suspended. She sincerely apologized to the parents and the public.

Asked if that was the right punishment, she de-hooked herself from the saga, claiming that she was in the hospital at the time and the matter was handed by one of the teachers.

Upon coming back to school, she reached out to the parents of the students to bring back their children for alternative ways of correcting the mistake.