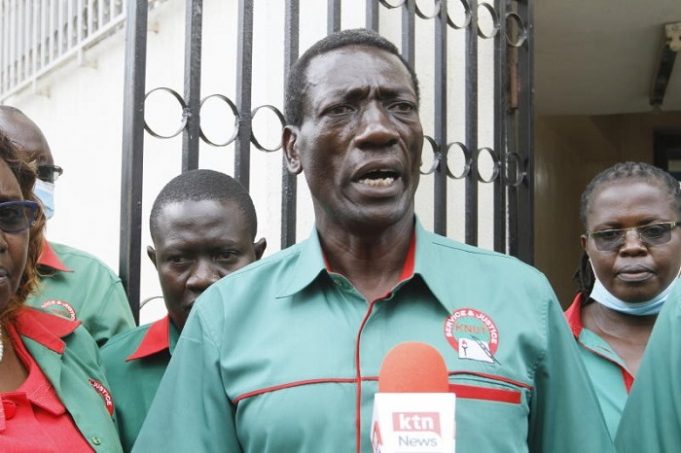 A war of words between Knut Secretary-General Collins Oyuu and his predecessor Wilson Sossion escalated Yesterday as both parties accused each other of giving inaccurate accounts of their assets and liabilities.

Sossion dared Oyuu to take him to court over accusations he left behind a mountain of debt and was yet to hand over property belonging to the Kenya National Union of Teachers.

“I understand Mr Oyuu has threatened to take me to court. They should avoid my name and fight their own woes. I left Knut legally, the only thing that is remaining is to handover within the next two weeks from the letter that I wrote,” said Mr Sossion.

He claimed that the union’s debt was Sh34 million as of April 2020 and rubbished Mr Oyuu’s allegations that they inherited a debt of Sh301 million.

“Mr Oyuu has been making false accusations against me since I left office. My attention has been drawn to allegations of existence of fictitious debts attributed to my administration. I find these allegations not only malicious and inaccurate but outrageous,” said Mr Sossion.

“Those guys are imagining the enemy is still Sossion. That’s where they go wrong. They are being pushed by the government,” he added.

Sossion alleged that the current officials had paid themselves salaries and allowances to the tune of Sh18 million per person monthly, amounting to Sh102 million since August last year against a monthly income of Sh160 million.

“It is therefore outrageous to create non-existent bills to cover up for their activities. I am only interested in protecting my legacy at Knut. The truth must come out as regards the authentic assets and liabilities as of June 25, 2021,” he said in a letter dated February 17.

Sossion further accused the Knut leadership of illegally operating the union’s bank accounts before they had been formally handed over by previous signatories.

He claimed the current leadership signed an ‘empty’ Collective Bargaining Agreement (CBA) for the 2021-2025 that has left many teachers unhappy.

The former secretary-general added that the current leadership signed off the traditional jurisdiction of Knut and gave away post-primary teachers without the consent of members.

“That limits the constitutional rights of teachers as stipulated in Article 41 of the constitution. They cannot kick out post-primary teachers by signing a recognition agreement with the employer,” said Mr Sossion.

He also alleged that the current leadership approved the closure of 63 branches without involving members. He also accused them of compromising and vacating judgments that took away teachers’ rights.

“They insist on supporting TPD while Parliament is interested in suspending the programme to save teachers,” he said, adding that Knut vacated a judgment that required TSC to develop regulations over TPD.

He further alleged that the union had embezzled funds then covered their actions by blaming the deficit on ‘past debts’.

While speaking on Saturday during the union’s special annual delegate’s conference (ADC), Oyuu had threatened to take Sossion to court if he continued to interfere with the union’s affairs.

“The former secretary-general is no longer a recognised teacher. He was removed from the register by the Teachers Service Commission (TSC) and also ceased to be a member of the union through the same as well as non-remittance of union dues,” he said.

“He should keep off Knut affairs as further interference will force us to take legal action. We strongly urge our members to stop involving themselves in unconstitutional activities. We have elaborate methods for channelling grievances in the union,” he added.