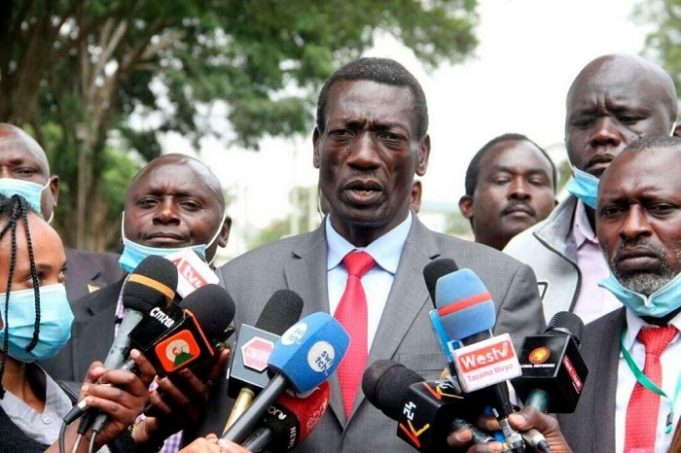 Teachers yesterday demanded the immediate repeal of the controversial delocalisation policy. Speaking yesterday, Secretary-General Kenya National Union of Teachers (KNUT) Collins Oyuu said there was no turning back on the policy saying that teachers would only settle for a framework that would see them serve where they feel comfortable.

“You will remember that we signed the 2021-2025 Collective Bargaining Agreement (CBA), there were several areas covered that had great benefit to the teachers’ work and their well-being. Clause 10 of the CBA shifted the transfer policy to five family considerations, the first priority during transfer of teachers,” said Oyuu.

He added that most teachers working far from their families have seen the quality of their performance at work affected since they cannot concentrate. “In that spirit of clause 10, we started the journey of formalising the repeal of delocalisation. In July, 2022, we managed to have a retreat with the employer, the Teachers Service Commission (TSC) and it is here the commission announced the collapse of the policy,” he said. According to Oyuu, since the announcement, the union has made numerous applications to TSC to have teachers who were transferred under the policy posted to stations near their families.

KUPPET: Increased Alcoholism and Divorce Among Teachers is Caused by Mental Health

“As we share with you today, several of our teachers who had already submitted their applications for considerations have been assisted, we still have data of others who availed the information and are yet to be re-routed due to logistical issues at personal level,” he said. “We are lauding the current regime for a very robust and positive take-off in addressing matters of teachers’ well-being. Repealing and re-routing teachers to their original counties and having families re-united is a way of addressing teachers’ welfare and ensuring they are motivated,” said Oyuu.

He lamented that many teachers were affected by the delocalisation programme after being taken to stations far away from their families and now is the time to give the affected teachers a chance to apply to be transferred to areas of preference.

Two weeks ago, Members of Parliament called on TSC to halt the ongoing delocalisation of teachers countrywide and comprehensively review its redeployment policy. Disrupted their lives The MPs expressed concern that the delocalisation had disrupted the lives of teachers, lowered their morale and caused untold trauma to many. The current government on its part affirmed its readiness to ensure teachers who were delocalised are transferred back to their home counties. This was agreed upon during a meeting between Deputy President Rigathi Gachagua and TSC. However, the transfer process could face hurdles with TSC setting stringent eligibility criteria to effect such transfer requests.

TSC has made it clear that for one to be considered for a transfer, one must have completed at least five years at their current workstation. Oyuu however asked TSC to engage the teachers on the criteria for transfers to avoid future conflicts. “Moving forward, we demand that policies being formulated must follow and adhere to public participation.

KNUT must be given its right place at the table of planning, formation and implementation of policies that affect teachers. With everybody on board, we are certain of evading gaps and coming out with the best,” he said.

Last week, Kenya Union of Post-Primary Education Teachers (Kuppet) announced that teachers affected by delocalisation and wish to change their work stations can now apply for transfers to their preferred regions of service. Secretary General Akello Misori said they agreed that teachers who were transferred to areas they did not apply for be re-routed to their preferred regions of service. Similarly, KNUT demanded that the government provides them with medical insurance cover that would comprehensively address their needs.