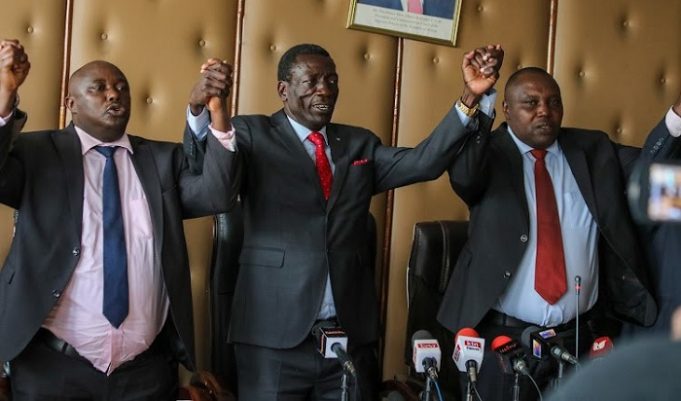 Kenya National Union of Teachers (KNUT) has demanded for reliable investigations to ensure teachers accused of having intimate with leaners acquire justice.

Oyuu was Speaking at the KNUT headquarters in during a media briefing, where he maintained that the accused teachers in most cases have never been given an opportunity to defend themselves.

“This trend can only be done away with if a structured, reliable and dependable investigations are carried out and the right culprits arraigned.”

The KNUT boss further gave a suggestion that a representative from KNUT be on board while dealing with disciplinary cases on the accused teachers, to give them moral support, since as union members, the accused deserve moral support.

Additionally, Oyuu suggested that the accused teachers be allowed to come along with their witnesses during the defense.

“KNUT has also proposed that teachers be allowed to have witnesses with them as they face disciplinary cases; this is because in most cases, the accused teachers have never been given opportunities to prove themselves beyond reasonable doubt over the cases affecting them. If possible; a trade union representative be on board to support the teachers on trial morally,” said Oyuu.

Teachers Set For A Bumper Reap In New CBA

The essence of the media briefing was to shed light on topical issues that were addressed during the Naivasha retreat with the teachers’ boss, Teachers Service Commission (TSC), the possible solutions and further update members on the progress of KNUT’s relationship with the TSC.

Another proposal was that a TSC and KNUT Sub-consultative Committee be formed to review disciplinary cases so that teachers who feel aggrieved through the normal process can be assisted.

Oyuu states that as much as they are not supporting the Canal Knowledge (CK), most of the accusations are done out of witch-hunt hence the affected teachers should not be convicted unheard, and that disciplinary cases spelt out in the code of regulations should be properly heard and well investigated before they are executed since.

“It should come out clearly and explicitly that KNUT-Kenya does not support nor condone canal knowledge. But this does not deprive the affected teachers of their fundamental and basic right by being convicted unheard. It has come out that most accusations especially on canal knowledge are done out of witch-hunt,” said Oyuu.

Canal Knowledge is simply having sexual relation with leaners irrespective of whether the leaner accepts or not.

According to Oyuu a survey done in the first quota of 2022 over cases ‘of discipline among teachers and their effects to teachers’ self-esteem by Center for Research and Education in Kenya (CEREK) indicates that eight (8) out of every ten (10) cases of CK are false and that most of the affected have something to do with settling scores.

According to TSC (Code of Conduct and Ethics for Teachers) Regulations,2015 a teacher shall not engage in any sexual activity whatsoever with a learner, regardless of whether the learner consents; makes a request to, or exert pressure on a learner for sexual activity or favor; or flirt with a leaner.

It further states that a teacher shall not send learner (s) to their personal residences for whatever reason; induce, coerce, threaten or intimidate a leaner in any way and particularly in regard to their academic performance, in exchange for sexual relations; or facilitate non-disclosure or cover-up of cases of sexual abuse against a learner.

For TSC to interdict a teacher over the CK the supportive evidence should include handwritten statements from victims or witnesses; exhibits which include love letters, photographs, gifts, agreements and court proceedings.

Investigation reports by heads of Institutions, County Directors or Sub-County Directors, Minutes of Board of Management (BOM)following interview of pupils or students, teachers and other witnesses, and County Discipline Panel minutes.