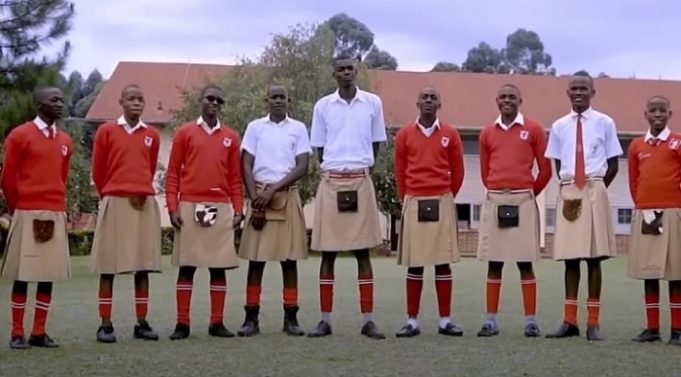 Principal Explains Why Boys In His Ugandan School Wear Skirts

A school in Uganda last week and part of this week snatched the attention of many, not only in East Africa but also globally. The school, which is a giant in both academics and co-curricular activities, has a very unique attire, which is used as the official school uniform.

The village where Nyakasura secondary school is located has never gotten answers to the question why the boys in the institution wear ‘skirts’, yet wearing of skirts is against the Ugandan culture.

The school, which is a mixed boarding and day high school in the Western regions of Uganda’s, has male students wearing ‘skirts’ as their official school uniform.

Giving reasons to the questions which have filled social media, the school’s principal confirmed that the skirt-like attire is actually a kilt. A kilt, according to him, is a traditional Scottish men’s attire, that resembles a skirt.

“People are misapprehending the concept behind their school attire, the skirt-like attire is traditionally worn by men in the Scottish culture,” the principal said.

Top 9 Best And Most Affordable Medical Institutions in Uganda.

2022/2023 First Year Students to Report to colleges in September

Deployment of P1 Teachers to Secondary Schools Wasn’t Advertised Because of These Reasons, TSC

The school principal confirmed that the school was founded in 1926 by Ernest William Calwell, a Scottish missionary who settled in Western Uganda during the colonial period which explains the concept.

The school’s history is linked to Scotland and Cowell who introduced the culture which was not well embraced by locals.

“The students in the school have understood the concept behind the dress code and no longer encounter culture shock,” said a form four student.

“Normally when I talk about my uniform and when they see students putting on a kilt, most of the time they say that we are dressed like girls but for me I have no problem with it because I have live with it for four years,” he added.