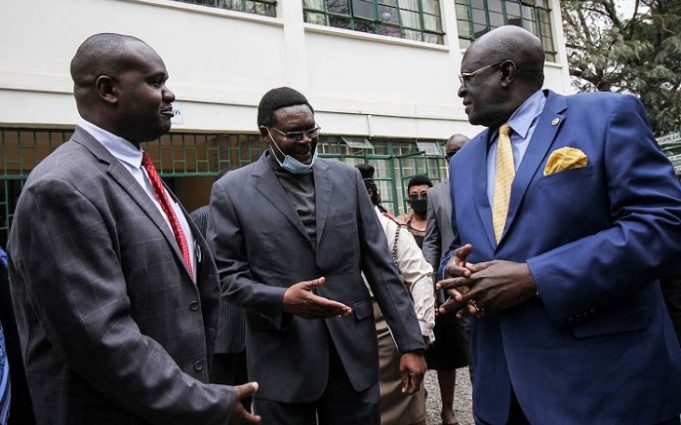 He said school heads should no longer complain about money as the government disbursed funds this week.

Magoha was speaking during a press briefing at Hospital Hill High School in Nairobi.

“We want to strongly urge principals to stop sending pupils home for money. They can at least give parents a few more days to sort themselves out,” he said.

Magoha however, singled out Nyandarua county saying there are reports that most learners were sent home.

“I am aware that in Nyandarua there has been a massive removal of children from school. Those children must be returned to school, immediately,” he said.

The CS also asked school heads to negotiate with parents as students continue staying in school.

“Let’s be sensitive to parents and give them time because even the month has not ended,” he said.

Magoha had previously said the Treasury disburses funds at the beginning of the school term.

He had said the government disbursed the capitation fund in April.

The CS had told teachers to focus on their duties and utilise public funds prudently to achieve the objectives.

“It’s good to say the truth so that you don’t misinform people. We issued the money at the beginning of the current term,” Magoha said.

The CS said Sh16.9 billion has been disbursed to schools.

School principals had raised concern with the CS warning them against sending students home, yet they have no money.

“We are asked to retain learners in school but how will they eat? How are we expected to pay workers, yet we don’t have money?” a principal who sought anonymity said.

Hospital Hill High School principal Ken Bunyasi confirmed to the CS that most institutions had received the funds.

“Most school heads started receiving the funds in their accounts yesterday,” he said.

Three school principals who were contacted by the Star confirmed that they had also received the funds.

“My school received the funds yesterday and we are grateful. I can confirm that the money is already in our account,” a principal from Bomet said.

Another principal of an extra county school in Nairobi also confirmed that the money had been deposited in the school account.

“We are grateful that finally the money has been sent to our school accounts, we can now run errands successfully in school,” she said.