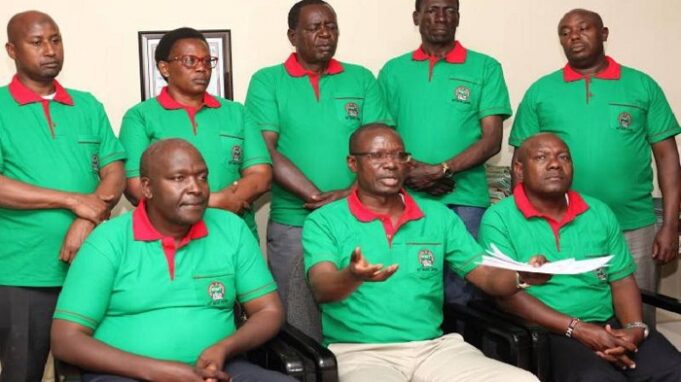 Seven Kenya National Union of Teachers, KNUT, officials have pledged their loyal support for the Secretary- General Wilson Sossion and distanced themselves from a plot to have him barred from seeking re-election.

Among the seven, are the KNUT acting chairman, Collins Oyuu and branch secretaries for Baringo, Mwingi, Mombasa, Kakamega East and Kajiado branches. They have seriously taken issue with a claim that 10 officials who signed a letter to the President and the Labour Cabinet secretary, were representing 90 branch secretaries.

“In every working environment, there can never miss disharmony. What I know is that only 10 met. That they represented over 90 branch executive secretaries is not known to me,” said Mr. Oyuu.

Relief To Teachers As The Church Comes To their Rescue

You Have No Right To Represent Workers: KNUT Branch Officials Tell Sossion

“Anyone opposed to Mr. Sossion should wait for elections scheduled for next year,” said Cheptarus..

The letter was also disowned by Kericho branch woman representative,  Ann Cheruiyot, who is also a member of the national executive council.

“We were not involved in the writing of the letter and therefore it cannot be the voice of branch secretaries or Knut teachers,” Ms Cheruiyot said.

Mombasa executive secretary, Dan Aloo, said his branch had not been consulted about the move against Mr. Sossion. He assured Sossion that Mombasa branch fully supports him.

Kakamega East branch executive secretary, Patrick Chungani, revealed that the people claiming to oppose Sossion were being used to fight him.

“There is nothing that Sossion has done to teachers to warrant his removal. Come next year, the teachers of this country will re-elect him as our secretary general,” said Mr. Chungani, who doubles up as the  KNUT western region chairman.

Kajiado branch secretary,  Elly Korinko, said the group of 10 executive secretaries is just determined  to cause disharmony in the union.

“We’re ready for elections and no one sent any group to go represent us. We’re able to speak on our behalf,” Mr. Korinko said.NEXT