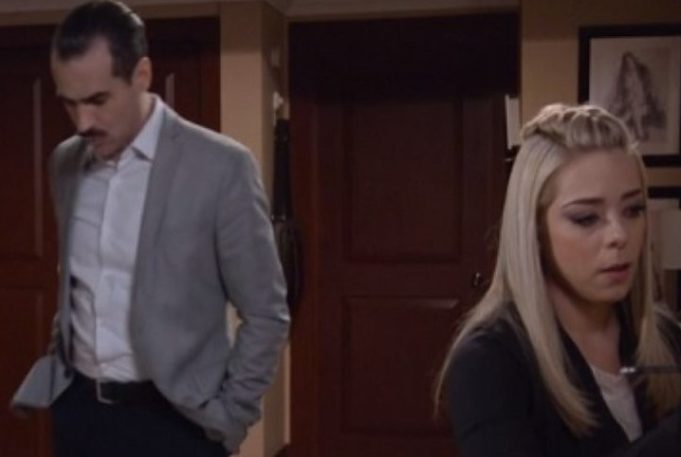 Diego is seen on a phone call, probably contracting someone to finish Ringo. On the phone call, they choose the club as their meeting point. Tuco enters with a lady psychotherapist just as Diego is preparing to leave to the club. He reminds Diego that the lady is his visitor, together with Hulia so that their matrimony is saved from a divorce. Diego however rubbishes him and insists he must go.

Rafael visits Sandra to give her the news that osso wants him to use his sir name. Rafael looks happy though Sandra has a contrary opinion since their relationship is blossoming. Raffa assures Sandra that his feelings towards her will not change even if he assumes the sir name of osso.
Mannuel is informed by Eva that max is going back to the seminary. Both of them feel that max is committing a mistake and they should counsel him. Max gets in and Mannuel commends him since he has been a doing a very excellent work. Manuel presents another job for max but he declines on grounds of resuming his seminarial studies. In Manuel’s thinking, max is behaving as ostriches do and he demands to know why Eva was informed before him. He strongly believes that it is Eva that made max to quit the seminary. Upon his confessions about the truth in Manuel’s opinion, Manuel encourages Max to pursue his love for Eva. Manuel tells Max to go and take cover in the seminary if he is not ready to fight for Eva’s love but assures him that his legal job is still in the company and will always remain there.

Osso scolds Ringo concerning the dance. In the process, Aleho appears and Ringo asks him about the plans for another match. Ringo sees that Aleho is bruised and Osso tells Ringo about the source of those bruises. Aleho warns them to leave him alone and stop meddling in his life if they must continue being together. Diego is seen with the man he has hired to beat Ringo, giving him instructions on how to deliver the message to Ringo. Hulia reaches in time and demands to know the message she has heard them conversing about.
Aleho enters Manuel’s office, raging why he told osso about the fight. Manuel refers to him as a son, a statement that annoys him more.…he warns him to stick to his lanes or he will quit the law firm.

Hulia is informed by Diego that Mancuso will be Tuco’s new instructor. Mancuso goes and Diego asks Hulia why she came late the previous night. She excuses herself and asks what the matter is because Diego is very cold towards her. Evan arrives and requests to see the uncle. Diego stills a kiss from Hulia and the leaves.
Hulia finds Rossa doing work at the cafeteria that belongs to Teressa. Teressa sends rosssa for fruits and Hulia accompanies her.
Diego listens secretly as Evan tells Mannuel that Diego is proceeding with Brenda’s case. Though Evan knows Diego has no evidence, his worries can be seen. Manuel reveals to him that on that fire day, Damasio got a bag containing the clothes that Brenda wore that day and that is enough evidence. Manuel feels that the investigation team that Diego used might have seen the bag also. The judge may find Brenda guilty if the eye witnesses and Diego’s lawyer talk about the bag and the clothes that had burnt. Evan is not for that route and Mannuel gives him an idea- to talk to Diego and agree.

Rosa scolds Hulia about the dance. Someone stops Hulia from parking her car at the space in the street. Hulia claims everyone owns the street and another person appears, warning her that she will not get her car should she go ahead and park. The second man, whom she nicknames a bully, identifies himself as Machado. Machando is actually the man Hulia came to see concerning some vaccines but she did not know.
Rafael agrees to use Osso’s sir name and this makes osso shed tears of happiness. He imagines how his father would feel having a grandson. A loooooooong hug between the father and the son is what follows.
Machado declines to give the vaccine to Hulia under claims of a wrong signature on the documents. Hulia begs but he cannot listen because Hulia had abused him that he is a bully…he however seems to be prompting Hulia to make love to him before releasing the vaccines. Rossa yells at Machando for being a coward and commands him to give Hulia the vaccines; Machando tries pushing Rossa and Rossa gives him a veeery hot fist on his nose……thanks to Osso’s boxing classes.
Mannuel is visited by osso and Rafael to discuss the process of giving Raffa his sir name. Mannuel tells them to take it easy since the process will not be difficult……Rafael is an adult. Right?
Hulia is captured on a call complaining about Machando refusing to release the drugs to her. Just then, Ringo appears mysteriously, and starts staring at Hulia’s nice figure with so much lust. Hulia reports the occurrence to Ringo, who as usual longs for a chance to help her. She is very happy now.

Rosa finds osso crying and demands to know the reason…osso surprises her that his tears are tears of joy since Raffa has accepted to be his son by taking his sir name, vila. He will now be Raphael El Osito Vila. They laugh with a lot of concurrence.

Diego acknowledges Brenda about his intention of killing her as the two are conversing in the garay mansion. He cannot tolerate her any more despite having tolerated her for decades. Brenda pretends she doesn’t understand what Diego is saying and Diego reminds her that she torched his house and she is very aware of that. She must go to the jail! Elser comes to Brenda’s defense, making Diego to yell more. Brenda yells as she runs outside and Diego follows her. Hulia wants to know the matter. Brenda claims Diego has gone nuts… and the least Hulia can do is to give him a hearing. Diego keeps shouting nasty things about Brenda and that he must eliminate her. The dog gets frightened and takes off. Brenda follows the dog, and Ringo runs after both the dog and Brenda.

Rafael and Zora meet accidentally in the street and Raffa asks Zora why she ran away. Zora advices him to look for a better place next time, if he wants love. Aleho meets them and Zora seems not to know him. He introduces himself as a lawyer, making Zora to flirt him using her sexiest smile. Zora gazes at Aleho with lusty eyes as he goes, making Raffa to wave so as to block her eyes.
Brenda and Ringo are in the street alone, looking for the dog and Brenda weeps that the dog must be found.