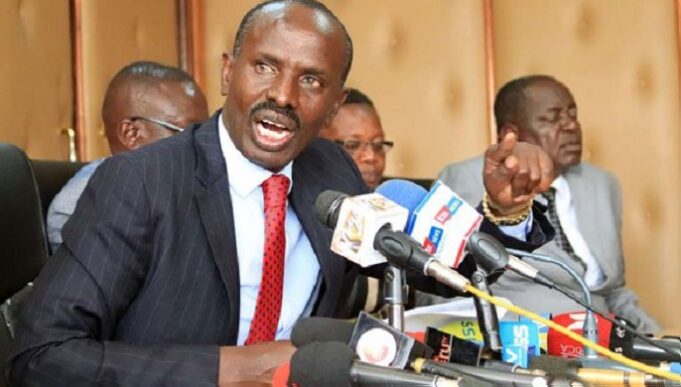 Mr. Sossion, who is currently facing stiff opposition from his national executive members, seems unmoved and undisturbed despite the strong and stage managed opposition. Unionists opposed to Sossion have blamed his leadership style on the falling fortunes of Knut.

For the first time since it’s registration as trade union, the Kenya Union of Post-Primary Education Teachers (KUPPET) is boasting of a larger membership than her sister KNUT even as the two giant teachers’ unions go to the polls next year. The membership of the once giant union has dropped to 32,000 in just two years. Teachers say Sossion’s combative style has upset TSC bosses and the Ministry of Education.

Teachers Who Have Withdrawn From KNUT To Go Back : Raila Urges Teachers, Defends KNUT (Watch Video)

After an exodus of members orchestrated by the Teachers Service Commission (TSC), the Kenya National Union of Teachers (KNUT) goes to elections a weakened body. This move should actually undermine Secretary-General Wilson Sossion’s quest for a third term, but he has insisted he must be in the ballot and that his competitors should brace themselves for a tough race.

Campaigns for the elections by the unions that have had contrasting fortunes in the past two years, have already begun at branch and national levels ahead of the January vote.

For a person to win a Knut national seat, he or she is required to have won top seats at branch level. Hopefuls for top union positions will declare their interest after winning at branch level.

The unions elect their national leaders for a five-year term. With no term limits, they can be re-elected as many times as possible. National elections will be held from April to June.

The registrar of trade unions issued a notice to KUPPET, KNUT and other unions in September to call elections early next 2021, in line with their constitutions.

Each county has 10 elective seats and three nomination slots. Though confident of a win, Mr. Sossion should be prepared to face stiff competition from people who want new faces in Knut.

Currently, Knut is in a financial crisis that has impacted the shutting of some of its 110 branches countrywide. Branch secretaries and other officials have gone without pay for several months and  Some office property has been auctioned.

Mr. Sossion had earlier hinted that KNUT does not have money for the elections but later shifted goal posts by confirming that elections will be held and announced the dates for branch elections. Mr. Sossion announced that KNUT polls would be held from January 4 to March 31, 2021.