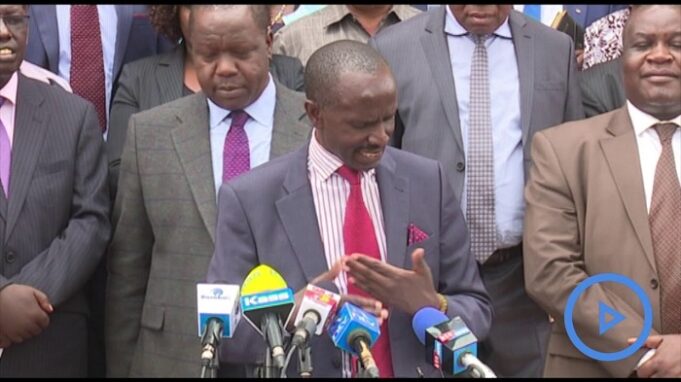 The Kenya National Union of Teachers (Knut) and the Kenya Union of Post-Primary Teachers (Kuppet), are in a very big disagreement over teachers’ membership, which could intensify their rivalry.

Knut has opened a fight with Kuppet, claiming that it is meddling in its long-standing dispute with the Teachers Service Commission (TSC).

Sossion has stated that Kuppet is least qualified to discuss Knut in its forums.

He accused Kuppet of failing to join global labour unions in piling pressure on TSC to stop anti-union activities against Knut.

“We, therefore, do not welcome your mischievous activities around the dispute between Knut and TSC, a dispute that we shall pursue to its logical conclusion using all avenues including courts of law,” said Sossion.

Last week, Kuppet Chairman Omboko Milemba termed the dispute between Knut and TSC as unhealthy and offered to support Sossion in negotiating with TSC.

“I am urging my brother Sossion to sit down with TSC. I am willing to lend a hand,” said Milemba while speaking in Siaya County where he was overseeing Kuppet branch elections.

Milemba also called on Knut to withdraw pending court cases against the TSC as a sign of goodwill.

However, Sossion stated in the letter that for Kuppet to purport to instruct Knut to withdraw legal cases and purport to volunteer to intervene ”is nothing but hypocrisy”.

According to Sossion, in September 2019, Kuppet accepted the removal of Knut’s 43,000 members in post-primary institutions from the union. The now non-union teachers would be subjected to agency fees.

He said millions of shillings are being wired monthly to Kuppet as agency fees.

“Our reliable investigations show that the money is shared as pocket money between top officials of Kuppet and TSC,” alleged Sossion.

Sossion challenged Kuppet to return to the Knut national treasurer more than Sh30 million paid to the union every month by TSC as agency fee.

“You have totally been compromised by the agency fee which is a favour that has been granted to you via TSC influence,” said Mr Sossion.

Sossion also accused Kuppet of siding with TSC and asking to be enjoined in matters that are in court between Knut and the teachers’ employer.

“This action is not only anti-union but immoral and does not promote solidarity at all in the labour movement,” said Mr Sossion

He also accused Kuppet of siding with TSC on promotion of teachers in line with career progression guidelines which, he said, abolished recognition of new academic qualifications.

So far, Kuppet has denied recruiting Knut members, saying that the union’s mandate is to represent post-primary teachers.

Kuppet has been calling for demarcation of teachers’ representation to have Knut represent primary school teachers only, which Knut is opposed to.