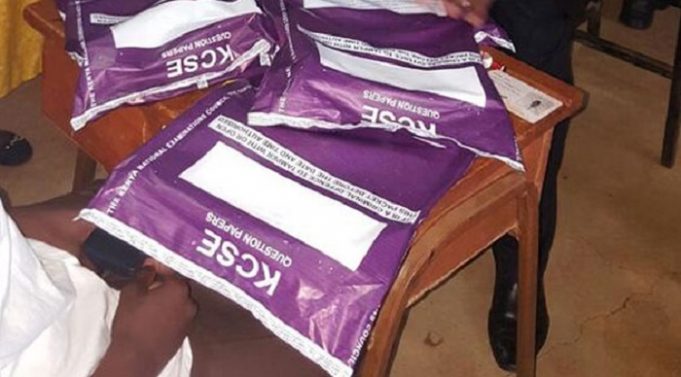 The Directorate of Criminal Investigations (DCI) has arrested three university students posing as examination agents and will be arraigned in Milimani Law Courts this morning.

The three are said to have collected more than Sh4 million, which had been distributed in two accounts, each with at least Sh2 million. The trio—Kelvin Mogaka, Francis Ogata and Bravin Ombongi—will be charged with conspiracy with the intent to deceive the public, publication of false information contrary to Computer Misuse and Cyber-Crimes Act, as well as being in possession of people’s ID cards and the unlawful registration of SIM cards using other people’s names.

Updated List of Venues and Dates For Collection of CBC Views

Storm in Parliament Over Macharia’s Mismanagement of Delocalization Policy

The arrest came on the day the Kenya National Examinations Council (KNEC) warned Kenyans against falling prey to fraudsters, who are out to mislead them into buying fake this year’s national examinations papers.

Investigations began last week when the council received reports that some people had opened several social platforms to distribute the alleged papers. Investigations by Knec chief executive Dr David Njengere had hinted an Egerton university student and when they traced the individual, he was found in possession of two different mobile phone numbers and they were demanding between Sh5,000 and Sh35,000.

Njengere said; “Upon checking, it was found that the culprit had opened more than 10 platforms and further investigations they found that the person was an Egerton university student,” an investigations official said. DCI followed up on this and established that the money was being sent to various bank accounts, which they opened and others belonging to their relatives.

“One relative, a teacher, has been identified and although he admitted to receiving the money, he had been cheated that it was from winning a lottery and already, he was constructing a house,” the investigator stated.

The bank accounts connected to this have since been frozen. It was later found that the student, a fourth-year student, works with others and led the investigators to his two other accomplices. The three were also found with several national identity cards, SIM and ATM cards and are now in custody. The three have been apprehended just about a month to the national examinations. But speaking yesterday Njengere assured that the exams are secure, nobody has access to them and all learners will only see the papers on the same day and time, once they are opened in the examination room.

“I urge all the students to revise for the exams and I wish them well. Let them not waste their money buying fake things because it will be a waste of their time and money,” he said yesterday. Knec will for the first time administer three national exams namely the KCPE, Kenya Primary School Education Assessment (for Grade Six) and KCSE to over three million learners, the largest number ever.