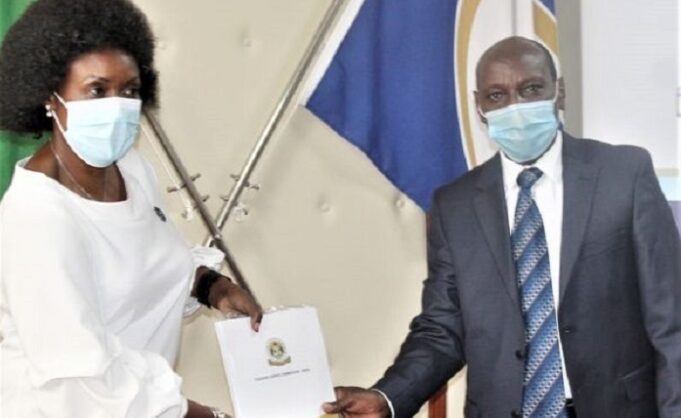 The new Teachers Service Commission (TSC) chairperson Jamleck Muturi officially reported to work yesterday, a day after he was sworn in.

Muturi, who was appointed for a six-year non-renewable term, was approved last week having been vetted by the National Assembly’s Committee on Education.

Muturi is taking office at a time when the commission   has been facing quorum problems because it had only two commissioners out of the required nine.

The rest of the commissioners had retired. With His appointment and that of Timon Oyucho, at least there is a minimum quorum for the commission to start playing its key mandate. The chairperson will therefore have to oversee negotiations for a new Collective Bargaining Agreement (CBA) for teachers, as the current one is coming to an end next month. The budget is almost being finalized and there has been no proper consensus on what to allocate teachers since the treasury decries lack of adequate funds.

Negotiations on the CBA have also not been started yet its late already. Should the new chairperson fail to work with speed and engage the unions concerning 2021-2025 CBA, then teachers should expect nothing this year, with regards to first phase of the CBA.

Muturi Confirms His Plans On CBA and Retraining For Teachers

The chairman also promised to implement fully and backdate 2017-2021 CBA with teachers who are yet to receive their final phases of the CBA, most of whom are the 17,000 KNUT members. The chairman doesn’t understand what such a move might cost him, and how he is going to go about it. This is what Macharia herself decided as a result of minor disagreements between her and KNUT boss Wilson Sossion. Completing the CBA implementation will therefore mean mediating between the two parties, both of which have hard stances.

Delocalisation of teachers, a policy which has been a bone of contention between the employer and the Kenya National Union of Teachers (Knut), is another matter that Muturi will have to deal with.

“I will seek to engage all parties involved in a bid to address the contentious issues surrounding this matter,” Muturi told the committee during vetting.

Besides Muturi, Timon Oyucho was approved last week and sworn in on Monday, to serve as a member of TSC, bringing the number of commissioners to four. Five more commissioners will have to be appointed to make it a full house.