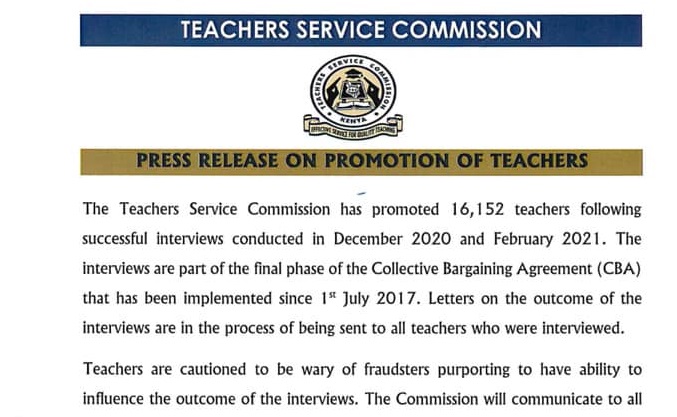 The teachers service commission, TSC, has confirmed the conclusion of December 2020 and February 2021 promotion interview results and that the results are already out. TSC CEO Nancy Macharia, through a press release, assured teachers that the commission has already started the process of sending promotion letters, and they will receive them soon.

” The teachers service commission has promoted 16,152 teachers following successful interviews conducted in December 2020 and February 2021. The interviews are part of the final phase of the collective bargaining agreement that has been implemented since 1st July 2017. The letters on the outcome of the interviews are in the process of being sent to all teachers who were interviewed,” reads part of the press statement.

The promoted teachers are expected to report to their new stations and assume the new roles on 10th May 2021 but will be given a grace period of 30 days to take their new roles.

Reliable sources have revealed that almost all the teachers who took part in the interviews have been promoted, and will receive their promotion letters.

TSC has assured the applicants that the interviews were free and fair and cautioned them against conmen, who milk huge amounts of money from them, with promises of influencing the outcomes of the interviews.