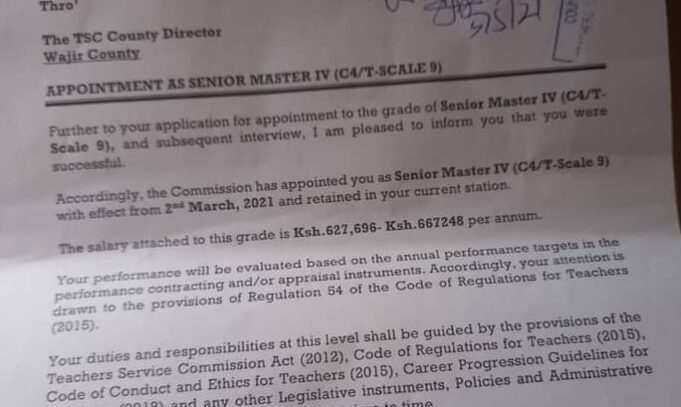 The TSC letters of promotion for the all the candidates who participated in the December 2020 and February 2021 TSC Promotion interviews are already out, as assured by the TSC CEO Nancy Macharia. These Succesful candidates will be either remain in their stattions or move to other stattions.

A good number of teachers from various counties have received their letters. According to the press release by Macharia, all applicants who took part in the interviews will receive their letters. What the CEO did not specify is the nature of the letters sent.  A section of teachers have raised fears that some of the letters might not be promotion letters but regret letter. However, TSC sources revealed that most of the teachers who attended the interviews have been promoted and should expect their letters.

Most of the teachers who have received their letters have been retained in their current stations, with only a few getting transferred to other institutions. Initially, there were fears of mass transfers as a result of the promotions.

The due date in almost all the letters scrutinized by our team is 2nd march 2021. What this means is that the salaries of the promoted teachers will be backdated to March 2021.

Those who have not yet received their letters should check in the school post office or enquire from their principals. In case the letters have not reached the principals, then the teachers are advised to collect their letters from their TSC county directors.