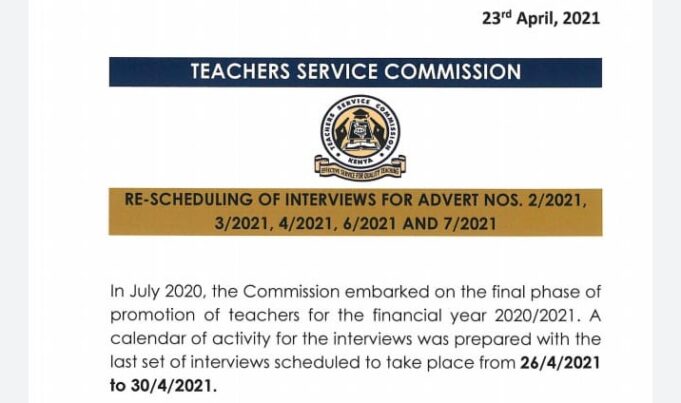 The teacher’s service commission, TSC, has rescheduled all the teacher interviews which it had scheduled to take place between 26th April 2021 and 27th April 2021.

The interviews, which targeted majorly teachers who are holders of diploma degrees, were meant to promote successful applicants to job group C2 and C3. The initial planned dates would not be convenient for a section of teachers, who would still be marking the Kenya certificate of secondary education exams in various marking centers in Nairobi.

Initially, TSC had maintained that the dates for the planned interview exercise will not be reviewed and that applicants who would fail to attend the interviews would not be considered for promotion. This was despite the numerous calls by KUPPET to have the dates reviewed. As recent as 22nd April, applicants were still receiving invitations, either through letters or through SMS. Some had even settled at the marking centres for the 2021 marking exercise.

Meanwhile, KUPPET, under the leadership of general Akello Misori, generated forms through google docs, where invited applicants who were taking part in the marking exercise were expected to write their details and sign. Data collected by KUPPET revealed that over three quarters of the invited applicants were expected to participate in the marking exercise. With this strong evidence, TSC had no options but to reschedule the interview to a later date.

Invited candidates who will be attending can prepare for the panel questions by clicking here.