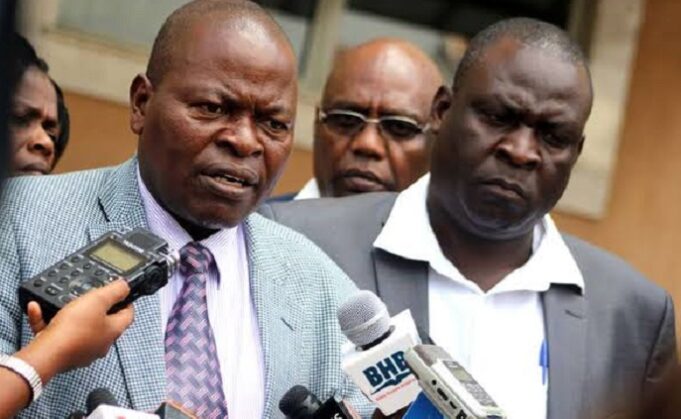 A teachers’ union has demanded that the government increases the number of teachers it plans to promote in January 2023.

In a December 22 advert, the Teachers Service Commission expressed intentions to promote 13,713 teachers in primary and secondary schools to leadership positions.

The Kenya Union of Post-Primary Education Teachers (Kuppet) is however of the opinion that more than 13,713 teachers should be promoted to help bridge the shortage.

“There is a need to amend the advert and increase the number of teachers who should be promoted,” said KUPPET secretary-general Akello Misori.

In the meantime, Misori asked teachers to be patient as they await the outcome of the talks Kuppet officials will soon have with the TSC over the matter.

“I hope TSC decision will be informed by the real need to amend and adjust the promotional advert of teachers, especially in job groups C3 and C4,” Misori said.

Orwa noted from a total of over 110,000 post-primary teachers, only 3,000 teachers were set to be promoted, representing only 0.2 per cent. “The number of Kuppet members set for promotion in the plan is like a drop in the ocean.”

“Most of the advertised promotions will benefit teachers in the higher grades. That means just a few teachers are set to benefit from the promotions as the majority, classroom teachers in lower grades, remain stagnated in the same job groups without a pay rise and advancement of their careers,” said Orwa.

He said many teachers stagnated in job grades C3 and C5 for between five and 22 years yet there has been no position being advertised for the same job group.

“The TSC must find a way of including classroom teachers in the promotion because they are the ones implementing the curriculum at the school level,” said Orwa.

Area Kuppet treasurer Florence Odour said: “What the TSC is claiming to be a promotion is actually a change of grades and job group names.”

She urged the TSC to listen to the pleas of teachers and address their concerns, in terms of promotions and pay rise.

In the advertisement, TSC indicated it was also targeting teachers in regular schools.Before pulling down the advert a few days ago, TSC targeted teachers in Special Needs Education institutions.